On August 12, 2019 at 3:00 P.M. Sanilac Central Dispatch received a 9-1-1 call of a one-car Personal Injury Accident that occurred in Flynn Township. The investigation determined that a 34-year-old female, Erin Lipka, was traveling southbound on Maple Valley Road north of West Peck Road in a 2014 Buick Encore when a horse, that had gotten loose, ran in front of her vehicle. She was unable to avoid the collision with the horse and the horse struck the front-center of the vehicle.

The driver was treated on scene and transported by Marlette EMS to Lapeer McLaren Regional Hospital. She was wearing a seatbelt at the time of the accident and the front air bag deployed. Alcohol does not appear to be a factor.

It was determined that the horse, owned by Ida Yoder of Brown City, was tied up outside of the Yoder General Store and had broken free and ran into the roadway into traffic. Due to injuries from the accident, the horse was put down by its’ owner.

Deputies were assisted on scene by Brown City Fire & Rescue. 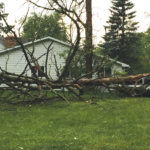 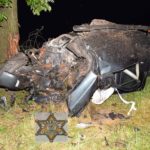