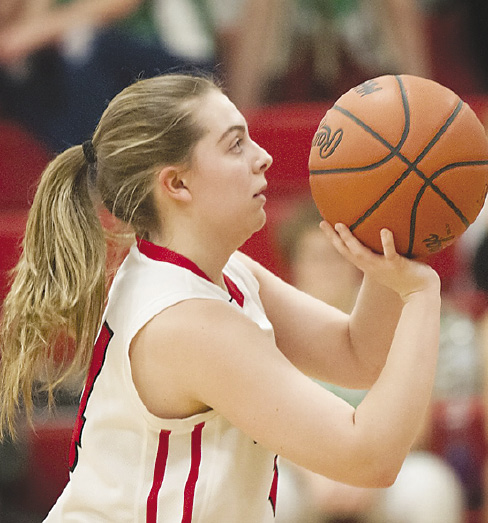 EAST LANSING – Abbey Bullis, Peck, is one of 11 recipients of the MHSAA /Farm Bureau Insurance Scholar-Athlete Award in Class C and D.
Students applying for the Scholar-Athlete Award must be carrying at least a 3.5 (on a 4.0 scale) grade-point average and have previously won a letter in a varsity sport in which the Michigan High School Athletic Association sponsors a postseason tournament. Other requirements for the applicants were to show active participation in other school and community activities and produce an essay on the importance of sportsmanship in educational athletics.
Each of the scholarship recipients will be honored at a halftime ceremony during the Class C Boys Basketball Final, March 16, at the Breslin Student Events Center in East Lansing. Commemorative medallions will be given to the finalists in recognition of their accomplishments.
Playing her third season of varsity basketball and finished her second of varsity volleyball in the fall, she will play her fourth of varsity softball this spring. She earned all-league honors in all three and helped basketball and softball teams to league titles and served as captain of all three teams at least two seasons. Bullis will graduate having completed nine college classes through dual enrollment and is participating in her third year of National Honor Society, participating in fourth years on math academic games and quiz bowl teams and serving her fourth as her class vice-president and as part of Sanilac County Youth Advisory Council. She participates in various volunteer efforts and earned President’s Gold Volunteer Service Award. Bullis graduated from the Hugh O’Brian (HOBY) leadership program and earned HOBY Leadership Certificate of Recognition. She will attend Oakland University and study mathematics.
Essay Quote: “I try to be a positive role model for the underclassmen at my school. When they are watching in the stands, I would like them to understand that sports are important, but how you carry yourself and treat others on the court is just as important. … Someone told me that people know me for my athletic ability and accomplishments, but that people remember me for the way I play the game and my positive attitude – win or lose. If this is true, I feel this is the best compliment I could be given.” 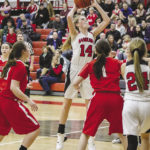