One of the featured items on display at Deckerville Historical Museum is this early 20th century buggy which has very special meaning to Deckerville native, Robert Phillips. Phillip’s great-grandfather, Frederick Christian Kritzman, immigrated to the United States in 1862, joining the 41st regiment of the NY State Infantry, Co 1, the same year. In June 1865 he was discharged at St Petersburg, VA, coming directly to Michigan following the end of the war. Frederick became a member of the Grand Army of the Republic (GAR) at its formation in 1866, composed of veterans of the civil war who fought for the preservation of the Union.
Frederick married Catherine Anglebrandt, age14, and together they homesteaded 160 acres south of Argyle. One of their nine children, Jacob Kritzman, Phillip’s grandfather, received the buggy as a wedding gift from his parents in 1914. Sears and Roebuck sold these in their catalog for $28.90. Jacob used his buggy to deliver catalogs for the US Postal Service. In his later years he gave his buggy to grandson Robert.
Pioneers Frederick and Mary are buried at the Freiburg Catholic Cemetery, Argyle.
Deckerville Museum,located just west of the stoplight, will open for the 2018 season this Saturday, May 26 and continue every Saturday through September. Hours are 10:00 a.m. – 2:00 p.m. 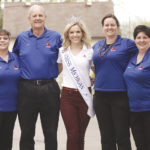