Nicol Motor Sales Is Back 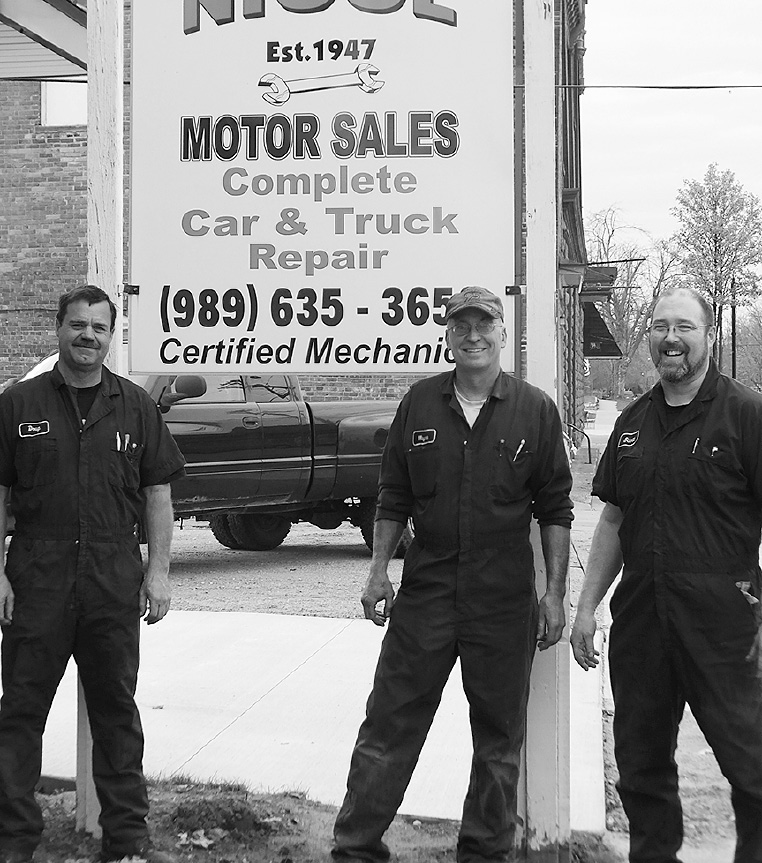 If you know Marlette, then you probably know Nicol Motor Sales. A family run business on Morris Street since 1947. You know the one with the big windows and the huge jade plant with Joyce behind the counter. Wayne Nicol is the third generation of his family to own the business, always eager to greet you as you walk through the door.
Last October a devastating fire burned the original building beyond repair. Wayne, Doug and Scott worked out of a temporary location while the new building took shape.
Nicol Motor Sales started on Morris Street in 1947 when Ernie and Mildred Nicol built the original garage and lived in the apartment above it. They raised their two children, Carl and MaryLou there. Carl worked with his dad and became the second generation in the family business. In 1955, Carl married Joyce and over the years, the couples four children, Penny, Keith, Carla and Wayne were brought into the garage. Carl bought the business from his Dad in 1970 but Ernie and Mildred remained living over the garage. Wayne became the third generation to run the business in 2000 when he took ownership.
Now, the building is bright and new, but the same people are still there. Joyce is back behind the counter to greet you as you enter the office. Doug, Scott and Wayne are back in the garage in Marlette. Wayne will tell you the antiques may be gone, the big jade plant is gone, but the memories are still intact. So if you missed the big open house, you can still stop in and say hello. You can see the new building, the expanded parking lot, and make new memories.
Wayne would like to express his thanks to Bowerman Woodworking, Orton Refrigeration, Donley Excavating, Keith Nicol Construction, Marv and Matt Wilcox, Scott Phillips, Auto Value of Marlette, Napa of Marlette, G & G Electric, Vassar Building Center, Ford Plumbing, Mortimer Lumber, The Woodworker Shop, Scott Guerne, Doug Sleda, Mom and Dad, My Family- Dan, Ashley and Heidi, and Everyone who helped in the clean up. moving, loan of tools, prayers, and support. Welcome back Wayne!