LANSING, MI – State Representative Aaron Miller (R-Sturgis) introduced a bill recently intended to bring Michigan’s new car sales and service regulations in line with neighboring states, allow economic free market forces to operate, and provide consumers in the state with common-sense options for purchasing automobiles.
Current law mandates that all Michigan consumers purchase new vehicles the same way and from the same type of institution – a third-party franchised dealer. Unlike the purchase of almost anything else, consumers are not allowed to make a purchase directly from an auto manufacturer. This creates protection to one specific business model and has the potential to stifle innovation that does not use the same model. Manufacturers are also banned from servicing automobiles.
“In light of our fast-changing world, I think it’s worth talking about other ways of doing things,” Miller said. “Current law is analogous to telling anyone who wants to sell hamburgers they can’t do so unless they enter a franchise agreement like McDonald’s. It doesn’t mean that McDonald’s is bad, but it doesn’t mean that selling burgers independently is bad either.”
Customers of Tesla Motors, the American electric vehicle manufacturer, realize this lack of purchase options most. For the hundreds of Michigan Tesla owners who need service on their vehicles, they must cross state (or even international) borders. And for the many more who want to learn about Tesla and their technology, they must do the same and travel to Indiana, Ohio or Illinois where the company is welcome to operate as they wish.
“Given the number of Tesla electric vehicles currently registered in Michigan, it is apparent that our residents have an interest in this technology,” Miller continued.
“Tesla naturally wants to address this demand and serve its current and future customers as best it can. Similar to how our local dealers invest in their core business to improve their customers’ experience, Tesla wants to do the same. And in order to allow that investment to happen, we must reevaluate current franchise laws that require the sale of a motor vehicle through a third party franchise dealer. My bill allows the choice between either business model.”
“Governor Snyder asked the legislature in 2014 to reevaluate this policy and have a discussion. That is exactly my goal; I want to initiate the discussion. That’s why I sponsored HB 5312. This is not anti-dealer and it is not a special carve-out for just Tesla. This is a bill that simply allows a business model involving direct sales of cars to operate in Michigan and continues to allow the dealership model to do the same,” Miller concluded. 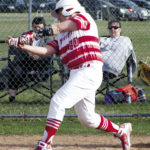 Next Story:
Raiders split with Ubly