Notice of Foreclosure by Advertisement–MAY III

Notice of Foreclosure by Advertisement
Notice is given under section 3212 of the revised judicature act of 1961, 1961 PA 236, MCL 600.3212, that the following mortgage will be foreclosed by a sale of the mortgaged premises, or some part of them, at a public auction sale to the highest bidder for cash or cashier’s check at the place of holding the circuit court in Sanilac County, starting promptly at 10:00 AM, on October 27, 2022. The amount due on the mortgage may be greater on the day of the sale. Placing the highest bid at the sale does not automatically entitle the purchaser to free and clear ownership of the property. A potential purchaser is encouraged to contact the county register of deeds office or a title insurance company, either of which may charge a fee for this information. MORTGAGE: Mortgagor(s): Christian P. May III, single man Original Mortgagee: Mortgage Electronic Registration Systems, Inc. (“MERS”), solely as nominee for lender and lender`s successors and assigns Date of mortgage: November 22, 2011 Recorded on November 29, 2011, Liber 1148, on Page 1, Foreclosing Assignee (if any): JPMorgan Chase Bank, National Association Amount claimed to be due at the date hereof: One Hundred Eighty-Seven Thousand Eight Hundred Eighteen and 48/100 Dollars ($187,818.48) Mortgaged premises: Situated in Sanilac County, and described as: Lot(s) 3177 to 3180, inclusive, Great Lakes Beach No. 2, as recorded in Liber 3 of Plats, Page(s) 13, Sanilac County Records. Commonly known as 7313 Oak Rd, Lexington, MI 48450 The redemption period will be 6 months from the date of such sale, unless abandoned under MCL 600.3241a, in which case the redemption period will be 30 days from the date of such sale, or 15 days from the MCL 600.3241a(b) notice, whichever is later; or unless extinguished pursuant to MCL 600.3238. If the above referenced property is sold at a foreclosure sale under Chapter 32 of Act 236 of 1961, under MCL 600.3278, the borrower will be held responsible to the person who buys the property at the mortgage foreclosure sale or to the mortgage holder for damaging the property during the redemption period. Attention homeowner: If you are a military service member on active duty, if your period of active duty has concluded less than 90 days ago, or if you have been ordered to active duty, please contact the attorney for the party foreclosing the mortgage at the telephone number stated in this notice. JPMorgan Chase Bank, National Association Mortgagee/Assignee Schneiderman & Sherman P.C. 23938 Research Dr, Suite 300 Farmington Hills, MI 48335 248.539.7400
1476988
(09-28)(10-19) 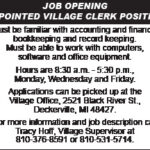 Next Story:
NOTICE OF MORTGAGE FORECLOSURE SALE–STEPHENSON AND GILLIS