Clark Honored for Decades of Service

Sanilac County Community Mental Health Board formally unveiled a plaque designating a section of the Journey Skill Center as the Leonard Clark Industrial Work Floor. The honor was bestowed upon Mr. Clark in recognition of his 36 years of service and his immense contributions to the development of Community Mental Health programming in Sanilac County.
In presenting the award, Jim Johnson, Executive Director of Sanilac County Community Mental Health stated “Leonard Clark has faithfully devoted his time and efforts for over 36 years towards the betterment of this Agency and the empowerment of those we serve. Over the course of that time, he has been instrumental in the creation and development of, among other things, our work program. It is only fitting that Sanilac County Community Mental Health should recognize his contributions to our programs by renaming this room The Leonard Clark Industrial Work Floor.”
Leonard commented on how far the agency has come since he first came on board. He also expressed his sincere gratitude related to this recognition and thanked everybody for showing up to celebrate with him. In addition to his fellow Board Members and agency staff, Sheriff Garry Biniecki, Leonard’s four children (Doug, Brian, Jackie and Kathy), one of his grandchildren (Chad), and his long-time friend and neighbor Henry Buiting attended the ceremony immediately before the August Community Mental Health Board meeting. 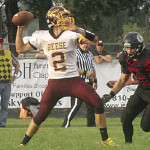