The Deckerville Eagles traveled to Kingston on Friday, September 18, and brought home a win with them, 34-14.
The first quarter of the game was scoreless, but both teams came alive in the second quarter. The Cardinals opened the scoring in the second with a 15 yd. pass from Riley Magiera to Kylan Pennington for a touchdown, with a PAT run good from Dalton Price.
The Eagles answered back, scoring twice – on at 50-yd. run by Jared Philpot (PAT failed) and a Brandon Pattullo 7-yd run (Pattullo PAT good), giving them a 14-8 lead at the half.
The third quarter was scoreless like the first quarter, and this time the Eagles opened the scoring in the fourth, with an Austin Spaetzel 20-yd. run for a touchdown, and a Philpot PAT. They scored again on a Wade Saldana 1-yd run, with the PAT failing.
The Cardinals made the game interesting, scoring on a 55-yard pass to Bo Mickelson from Garrett Green. The PAT failed.
The Eagles scored the final touchdown of the night on a Brandon Pattullo 55-yd. pass to Wyatt Janowiak. The extra points failed, giving the Eagles a 34-14 win.
D.J. Fritch was 12-48 rushing, Pattullo 8-28, Philpot 16-107, Saldana 14-86, Spaetzel 1-20 and Matthew Buzzo 1-3. The Eagles had 18 first downs, were 51-292 rushing, and 3-2-59 yards passing, for 351 total yards.
The Cardinals were held to 4 first downs, were 33-53 rushing and 7-3-83 yards passing, for 136 yards total. 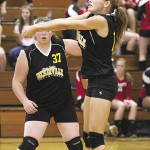 Next Story:
Raiders come up short against Ubly