Coming off a doubleheader sweep at the hands of Kingston in a crossover battle early last week, the Peck softball squad rebounded with a split of games with Bay City All-Saints.
The Lady Cardinals touched Peck for 15 runs in each of their two games earlier last week while Peck’s offense fell silent. The lone hits for the Lady Pirates came from Leah Engler with a pair of hits and Abbey Bullis went 2 for 3 from the plate.
Against Bay City, Peck dropped game one 4 to 1 and rallied in the late innings for a 17-6 decision in the nightcap. With the game tied 6-6 in the fifth inning, Peck put together a nine-run rally to pull out the win.
Emma Engler sparked the Peck uprising with a double, single and five RBI while Anna Dhooghe chipped in with a single, triple and four runs batted in. Leah Engler, Bullis, Auby VanConant and Grace Sullivan all had two hits apiece to back winning pitcher Morgan Winarski who allowed eight hits, six runs and struck out six. 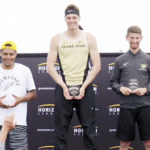