Trevor Willing lines up for a painful looking tackle against Harbor Beach last week. The Redskins face off with the Ubly Bearcats later this week.

There were plenty of fireworks Friday night, on and off the field. The 2015 football season continues to be a highly successful one for the Sandusky Redskins. They gave yet another dominating performance offensively, and defensively, as they rolled to their fourth consecutive win of the young season, crushing Harbor Beach (0-4) 43-8. Fireworks were lit off in celebration with each Sandusky score and the crowd enjoyed a fireworks show following the conclusion of the game.
With the win, the ‘Skins are now 4-0 overall and 1-0 in the GTC-East. Looming this week is a huge showdown with the Ubly Bearcats in a contest that will be hard hitting and have heavy league championship implications riding on it.
“We tell the kids all the time, it’s one game at a time,” cautioned Sandusky Coach Craig Jacobson. “We give ourselves a short time to enjoy a win, but it’s back to work Monday on the next game.” And none may be bigger than the one coming up this week in Ubly.
Last week, Sandusky rolled up another gigantic offensive performance against a depleted Pirate squad, piling up 439 yards rushing. C-PS transfer Casey Hyatt took over the Redskins running game Friday night, exploding for 214 yards on just 10 carries and scoring two scores covering 47 and 71 yards. He also had an interception as the first half ended, returning it 64 yards to the ‘Beach 16 before being hauled down and added 40 yards of kick-off return yardage
Senior Chase Tucker had another solid night, carrying the ball just seven times but gained an amazing 171 yards, averaging 25 yards every time he touched the ball. Tucker scored twice more, on runs of 60 and 83 yards to push his total to 12 touchdowns on the season and is just shy of 800 yards rushing for the year.
The two GTC-East foes played to a 0-0 stand-off in the first quarter before Joe Stone put Sandusky on the board with a eight yard run to the endzone. Hyatt picked up the first of his two scores in the second quarter sprinting 47 yards and then Tucker went virtually untouched on his 60 yard jaunt to paydirt to put the home team up 22-0 at the half.
Harbor Beach came out and displayed some life to start the third quarter, punishing the ‘Skins defense in a length-of-the-field drive, scoring on a 12 yard run. The Redskins responded with some exciting football of their own, with Tucker’s 83 yard race to the other end, Hyatt’s second score on the night on a 71 yard romp along the far sideline and Wray DeVault’s two yard dive to cap the scoring explosion.
The Sandusky defense bent but didn’t break once again this week, coming up with key stops when the Pirates seemed to possibly be in position for a long scoring drive.
Following their league clash with Ubly this week, the Redskins play a pair of rivalry games at Marlette and at Brown City. League and play-off implications mount with each game the ‘Skins win, needing just six wins to qualify for the post season.ading Redskins of Sandusky. 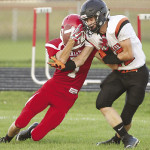 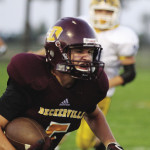