Coaches: Dorothy Conklin-Ross, Sue Hale, Matt Dickendesher (all 5th year)
2014 record: 7-1-6, 3rd in Region 28, #1 singles (Dekam) state qualifier
Key returning players: Sandusky will be led by seniors Josh Dekam, Danny Hale, Caroline Ross, Jack Norton and Michael Wentzel. The first four have four years of varsity playing experience, with Wentzel along for year three. Juniors Brady Scribner and Amanda Mrozek return to provide additional upper-classman experience. Solid sophomores Justin Stone, Ethan Roggenbuck and Trenten Pardy round out the holdovers from last year’s squad.
Losses to graduation: Only veteran doubles player Keri Molloy is lost from last year’s group via graduation.
Top new prospects: Freshman Eric Brown should contend for a varsity position, while Blake Kartanys, Kaelyn Demmon and Ethan Williams add depth to the squad.
Comments on this year’s team: The 2014 team performed admirably after being gutted by graduation following a 2013 trip to the state finals. Expectations are high for this year’s team, with only 1 graduating senior (Molloy) departed. Dekam (10-4) and Hale (11-2) dominated regular season play at #1 and #2 singles last season, and should be even better in their senior campaigns. The team’s other seniors – Ross, Norton and Wentzel – all worked hard on their game over the summer and should be in top form. Scribner, Mrozek, and Stone will be key players after their initial varsity performances in 2014. Roggenbuck and Pardy added solid depth last season and should progress this year. Our goal for the season is to make it back to the state tournament as a team.
Comments on the league this season: Only two schools remain with a Boys Tennis team in the Greater Thumb Conference. We have matches scheduled against league rival Cass City and will play other local schools such as Yale, Caro, Cros-Lex, Imlay City, Marysville, Port Huron High and Frankenmuth. Additionally we will host Saginaw Nouvel and travel to Almont. Sandusky is also hosting a 4-team tournament on August 28, with Davison, Yale, and Cass City also participating. 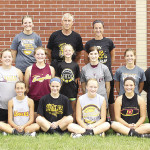