Sandusky was able to get six wrestlers through to Regionals! Regionals will be held at Clinton High School next Saturday, February 16.
Chase Hartz – 130lb Champion; Cody Hartz – 152lb Champion; Anthony Filkins – 2nd Place; Jacob Horst – 3rd Place; Tim Eagle – 4th Place; Adam Scott – 4th Place
The story of the day for Sandusky was Senior Cody Hartz. He came in seeded 3rd in what was considered the toughest district in the state at 152lbs by MichiganGrappler.com. Not only did he win the district, but he pinned everyone on his way through the bracket. He wrestled really well. Sometimes, it’s about peaking at the right time. Cody is definitely peaking. Cody has raised his record to 44-3 on the season.
Not to be outdone by big brother, Freshman Chase Hartz was our first qualifier of the day. Chase was seeded 2nd at 130lbs, and also pinned his way through the bracket. Chase continues to impress – with how calm he is on the mat. He definitely doesn’t wrestle like a freshman out there. He set himself up nicely for regionals next week. Chase is now 37-7 on the season.

Anthony Filkins didn’t have the finish to the day that he wanted, but overall had a great day. Finishing 2nd at 215lbs, he pinned his first opponent from Morenci, and then had a 12-5 victory over Lutheran Northwest. In the finals, he dropped his match to Logan Badge of Clinton. Filkins is now 39-3 on the season.
Jacob Horst finished 3rd at 160lbs. Jacob had a great day overall. He dropped a match in the Semi-Finals that he can probably win. But he came back strong through the consolations to finish tough. Horst is now 34-10 on the season.
Tim Eagle finished 4th at 135lbs. Tim has come a long way this season. His matches were all very close, so with a good week of practice, he can end up making it through next week.
Adam Scott finished in 4th place at 285lbs. Adam had a very close match with the Clinton kid who won the tourney. He even had him on his back a couple of times. I think he has a legit shot at getting out of regionals.
Coach Adam Filkins said, “This is the most we have sent on beyond districts in quite a while. I think they all have a chance to move on to States, but that is always tough. They have all proven they will be ready to battle, that’s for sure.” 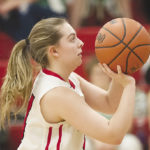