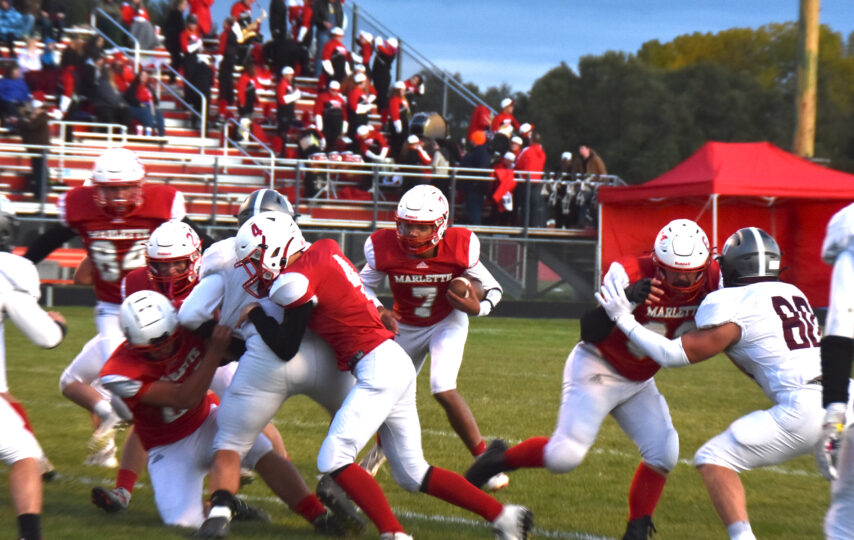 Marlette played host to the Cass City Redhawks last Friday night for a back and forth scoring onslaught.
Both teams came out firing on offense with Marlette drawing first blood on a 8 yard run from Logan Malloy. Westley Chapin converts on the two point attempt and Cass City wasted no time answering with their own score off of a 52 yard breakaway run. Marlette’s Tyler Izydorek scampered for 6 yards for a touchdown to retake the lead on the Redhawks, 14-8.
Cass City’s Ryker Wallace broke away for another long one for Cass City, scampering 42 yards for the touchdown. Cass City attempted the PAT but the Marlette defense got a hand on the ball and the kick was well short of the uprights. Cass City snuck in one more score before the buzzer sounded in the first quarter but failed the two point conversion for a first quarter score of 20-14 Cass City.
Marlette Quarterback Quentin Sartin scampered for 6 yards for Marlette’s lone touchdown in the second quarter. The two point conversion is no good. Cass City’s Landyn Schott broke free for another 49 yard run for the answer and the two point conversion is good to bring the score to 28-20 to end the half.
The back and forth stopped in the second half when Cass City rallied for 4 more scores before the game was over while holding Marlette scoreless in the half. “I am very proud of our guys for battling tonight. We hung tough for a half but simply wore down as the game went on.” Stated Marlette Head Coach Denny Lester, adding “I thought we executed our game plan offensively in the first half really well. We struggle so much on defense right now.” Marlette totalled 231 yards of offense on the night on 61 plays, for an average of 3.8 yards per touch. Marlette completed 4 passes on 12 attempts for a total of 39 yards. Marlette’s rushing yards were 192 on 49 attempts for an average 3.9 yards per carry. Quintin Sartin led the Raiders in yards with 89 yards rushing and 39 yards passing. Tyler Izydorek tallied 65 yards on the ground for the night on 19 carries. Logan Malloy had 34 yards on 8 rushing attempts. Aaron Bower had 25 yards receiving on two catches for the Red Raiders. The Raiders move to 2-3 with the loss and will look to Vassar this Friday for a chance at redemption.

Next Story:
Reese no Match for Sandusky