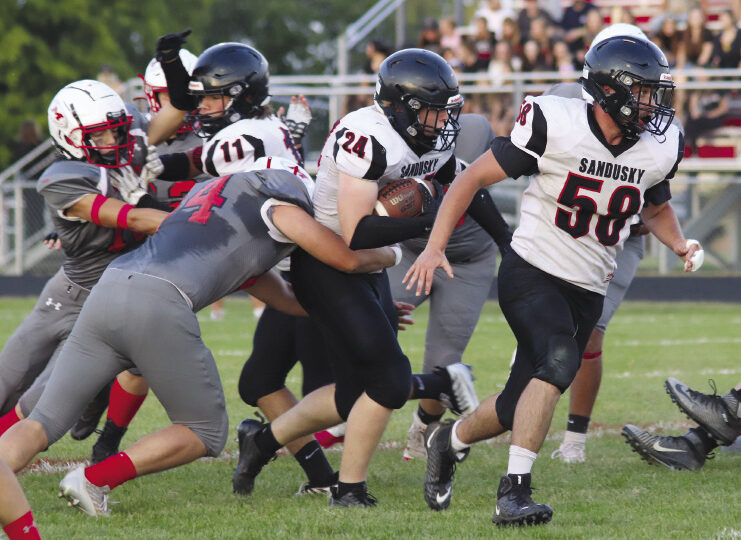 The Sandusky and Marlette football teams clashed on Friday night on Marlette’s field, with the Raiders taking the win, 28-14.
Marlette Coach Denny Lester said, “This was just an outstanding win for our team. This group of kids have lost to Sandusky when these groups have played each other every year from junior high and JV. To see their faces after winning this game, that is worth everything as a coach.”
Both teams scored 8 points in the first quarter, and neither team scored in the second for a half-time tie. Marlette scored first on a Logan Malloy 80-yard run. Quintin Sartin completed a pass to Aaron Bower for the 2-point conversion. With a little over 2 minutes left in the quarter, Sandusky’s Kyle Guibord ran in a 19-yard touchdown. He also ran in the conversion.
Coach Lester said, “We had an up and down first half. We did some good things and then would struggle at times. Credit Sandusky for that. They had a great plan and their kids executed well. We were very fortunate to recover the fumble in the end zone on their first drive. Then to go eighty yards on the next play, that was such a big time play for us.”
Lester added, “I really challenged the kids at the half. I gave it to them pretty good. We are a young team and we don’t have that emotional leader yet. It just hasn’t manifested yet. I had to get after them and they responded in a big way. I couldn’t be more proud of them. We need to build on this win and continue to just work in practice and get better.”
Marlette added 12 points in the third quarter, and held the red and black scoreless. The Raiders scored on a Quintin Sartin 8-yard run, with the conversion failing and a Tyler Izydorek 25-yard run, conversion failing.
Sandusky scored their final touchdown in the fourth with 11:49 on the clock, when Kyle Guibord connected with Brenden Long for 66 yards. The conversion failed. The Raiders scored with just shy of eight minutes on the clock, with Quintin Sartin running in a 1-yard touchdown. The conversion run by Logan Malloy was good.
Sandusky’s Kyle Guibord was 4-6-99-1 passing, receiving were Brenden Long 1-66-1, Tyler Franzel 1-26, Danny Tovar 1-5 and Jackson Reinke 1-2; Marlette’s Quintin Sartin was 2-2-16, receiving were Tyler Izydorek 1-9 and Dominic Crossno 1-7.
Rushing for Marlette, Logan Malloy 8-94, Quintin Sartin 18-80, Westley Chapin 11-77 and Tyler Izydorek 3-30. For Sandusky, Wyatt Heberling 10-86, Tyler Franzel 8-41, Carter Krause 10-34, Kyle Guibord 5-24 and Jackson Reinke 4-10.
Marlette’s defense was led by Jack Macha with 7 tackles and Westley Chapin, Aaron Bower, and Logan Malloy with 5 apiece. 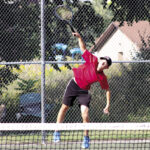 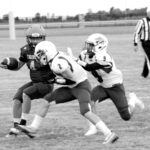