Sandusky Falls to Ubly on the Road

Sandusky traveled to Ubly to face off with the Bearcats last Friday night. Ubly set the tone early with three touchdowns and PATs while keeping Sandusky scoreless to bring the score to 21-0 after one. Ubly ran in two more touchdowns in the second quarter with two PATs to bring the score to 35-0. Sandusky was able to slow down the Bearcats in the second half, holding them to only 7 points for the remainder of the game but the damage had already been done and the fourth quarter score by Tyler Bush and subsequent 2 point conversion left the final score at 42-8. Jackson Reinke led the charge for Sandusky with 66 yards on 11 attempts. Kyle Guibord ran the ball 10 times for a total of 40 yards. Guibord also threw the ball 2 for 4 for 15 yards. Chase Green tallied 16 yards on 8 carries. Tyler Bush had 11 yards on 3 carries and one touchdown. Carter Krause ran for 10 yards on two attempts. Kory Lambson led the defense for Sandusky with 9 tackles on the night. Sandusky’s record now stands at 1-4 as they hit the road again this Friday to take on the Rockets in Reese. 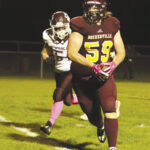 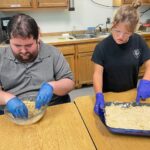 Next Story:
Students Learn about New Foods with Recipe Exchange