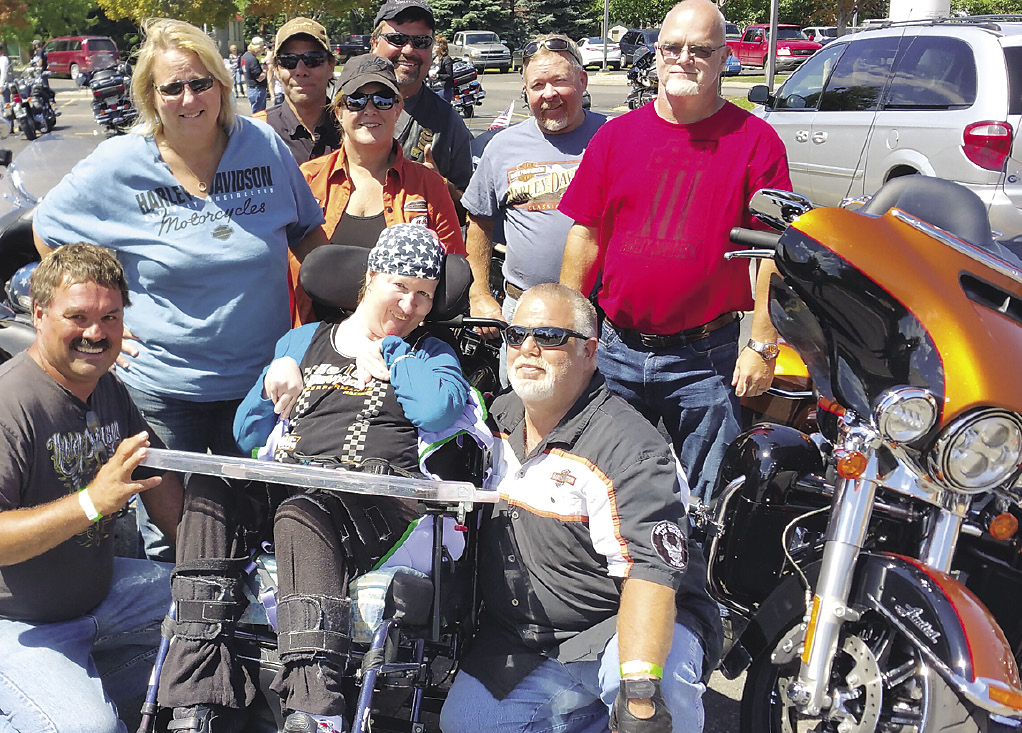 ies in Sanilac County, Melvin is a quiet little village with not much happening on a Saturday morning. Unless it is the second Saturday of August.
The 11th annual Hog Town Run, which benefits United Hospice of Marlette, roared in to town last Saturday, a few bikes at a time.
By the time the village’s noon whistle signaled the start of the ride from Melvin to Marlette, event organizers say they expected approximately 800 motorcyclists and 1,200 participants had lined up on Main St. to take part. Bikes of all shapes and sizes, many of which were eye catching versions of Harley Davidson motorcycles, were lined up on both sides of the streets and eventually down the middle of the road. After a tribute to Veterans was held in the Melvin Park, Marlette also thanked the riders with a Blessing of the Bikes” as they continued on their journey.
“This is a great event that a lot of bikers have come to really look forward to,” said one of the event coordinators, Chris Madia. “It’s for a great cause and everyone gives out of their hearts for United Hospice. It’s a very special cause that we’ve all become very attached to. We’ve raised a lot of money over the years.”
Madia said in the first ten years, the Hog Town Run has garnered over $130,000 for the Hospice program. “We wanted to do a little bit to help those families with needs who had loved ones in the final stages of their life. It is a difficult time for everyone and we hope this helps them some. To not have to worry about financial issues.”
According to event organizers, motorcyclists, both individually and in large groups, came from as far away as Canada and Ohio while countless riders also converged on the small village of Melvin from all across the state. A light rain shower early in the day did little to dampen the spirit or determination of the riders. After the jaunt to Marlette, several bikers took part in a poker run, finishing up with a large cook-out and celebration party at the Brown City Park. Those that chose to take part in the poker run covered 100 miles, or more, by the end of the day.
Marlette United Hospice resident, and longtime Marlette resident Frank McCoy had the opportunity to enjoy the sights and sounds of the bikers arriving at Marlette Regional Hospital. Staff and family members helped roll him out under the facility’s parking lot awning in his hospital bed as several bikers walked up to Frank and his wife, Loraine and greeting them with hugs and well wishes.
“This is just wonderful, what they do for Hospice,” said Loraine. “Frank just wanted to come out and enjoy this. It was really nice of some of them to come up and spend some time with them. We really appreciated that and I know it meant a lot to Frank, and to all of us. He gets terrific care here and this is such a good cause,” she added as the bikes roared away. It’s our first time to see the bikes and this event.”
Also coming out to check things out, thanks to her husband, Dale, was Beth Ann Simpson. Despite not being able to ride like she used to 13 years ago when the Marlette resident became disabled as a result of an accident, Beth Ann still enjoys wearing some of the biker garb and being wheeled up and down the many rows of bikes lined up in the parking lot of Marlette Regional Hospital. Countless Hog Town participants took time to greet them and let her get an up close look at the bikes she loves. She even had per picture taken with some of the riders, leaving a smile on her face.
With 2015 in the books as another successful ride, plans are already underway for 2016 to make it an even bigger and better success.
The Tribune-Recorder-Leader obtained permission from both the McCoys and Simpsons to use photos and speak with family members for use in this story.”