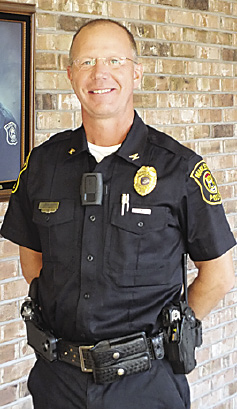 MARLETTE- Police Chief Brian McGinnis, a 1988 graduate from Marlette High School, has now served twenty-five years with the Marlette Police Department. After graduating from high school, Brian enlisted in the U.S. Army as a Military Police. He served for two years and was stationed in Alabama and Missouri before being honorably discharged and served an additional two years in the inactive reserves.
He then returned to Marlette and attended the Delta Police Academy at Delta College in Pontiac for 18 weeks. At the end of the academy Brian was hired by Marlette and has remained on the force. Brian has served as Police Chief for six years.
Brian’s desire from the beginning was to live and work in Marlette and feels very fortunate to have had the opportunity to serve the community. “You always win with a small town, like Marlette,” according to Brian. Although, he did agree that there were some difficulties as well. “In a small town, everyone knows everyone else’s business and sometimes that can be challenging to a police force.” But he strongly feels the few difficulties are strongly outweighed by the positives.
“My family is my rock,” was Brian’s response when asked how he copes with the stresses of being a Police Officer. Kim (Rumpf) McGinnis and Brian will be celebrating 21 years of marriage. Brian and Kim have three children, stepson Chris Kravitsky who is a Deputy with the Sanilac County Sheriff’s Department, Hunter is a senior in high school, and Chase, their youngest is a freshman. The family enjoys camping and cross fit training.
In addition to serving as Marlette Chief, Brian is also the Junior Varsity Football Head Coach and is active in the community.
During Brian’s service as a police officer, he has seen his share of tragedies and he mentioned those are the toughest parts of his service. But, Brian and the entire Marlette Police Department, have been there to lend a helping hand when needed in the community as well. “Marlette’s been good to me,” Brian stated.
Brian’s future plans for the department include remaining vigilant. Ensuring the department is prepared for future challenges, including natural disasters. Brian’s twenty-five years of faithful service is greatly appreciated by the citizens of Marlette.
Congratulations Brian on your twenty-five years of faithful service to our community.