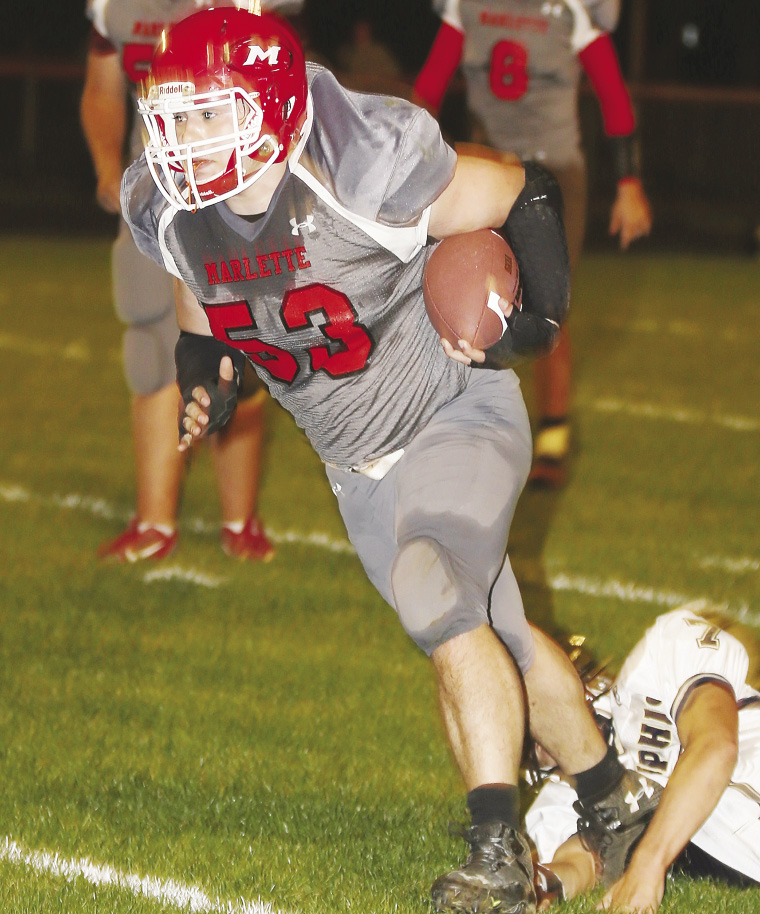 The Marlette Red Raiders were able to pick themselves up from a lopsided loss to Sandusky a week earlier and rebounded with a solid performance in a 49-12 win over Memphis Friday night. Coach Denny Lester was pleased with the outcome, noting, “It was nice to get back in the win column. We were able to get out of the gate strong tonight and get some confidence. Our passing game was sharp. I thought we did a nice job mixing the run and the pass. We need to continue to work hard. We know what’s at stake. I am sure that our team will work hard and be prepared for Harbor Beach.”
Friday night, Marlette put 15 points on the board in the opening quarter, scoring two minutes into the game when quarterback Ethan McKenney hit Isaac Dale with a 28 yard scoring strike with 10:31 in the clock. Late in the first quarter, Ethan Stover capped a scoring drive, diving in from a yard out to give his team a two touchdown lead.
The Red Raiders kept their offense rolling in the second stanza as McKenney went back to the airwaves to connect with Aaron Lefler on a 22 yard TD pass and Chorben Chisholm muscled his way in from 15 yards out to run Marlette’s lead to 28-0 at the half.
The Red Raiders, after giving up a third quarter score to the Yellowjackets, outscored their