Matthew and Susan Cole of Applegate are pleased to announce the engagement of their daughter, Kortney Lynne to Zachary Wayne Ball, son of Michael Ball of Sandusky and Maureen and Robert Sollman of Brown City.
Kortney is a 2010 graduate of Sandusky High School and 2015 graduate of Central Michigan University with a Master of Arts in Counseling degree. Kortney is employed as the High School Counselor at Bad Axe Public Schools.
Zachary is a 2011 graduate of Sandusky High School and is employed at Ball Equipment of Richmond in web development and marketing.
Kortney is the granddaughter of Eugene and Frances Kritzman of Ubly and the late Ronald and Murraylyn Cole.
Zachary is the grandson of Jackie and the late Wayne Ball of Sandusky and the late Joseph and Carmela Ehardt.
The couple is planning a June 2016 wedding. 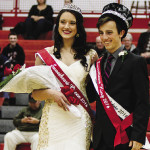 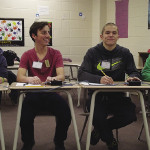 Next Story:
Sandusky Quiz Bowl Stampedes to the Top