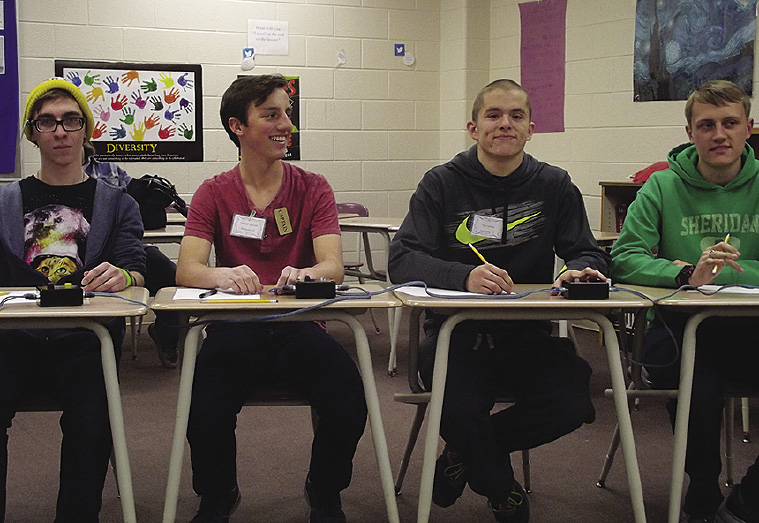 The Sandusky Quiz Bowl program is very, very strong this year. In fact, no other school has ever had the degree of success that Sandusky is currently experiencing in the Thumb Area Quiz Bowl League’s seventeen year history.
Both the middle school and the high school have one team that is undefeated. The SMS A Team has won every match played at the Thumb Area Quiz Bowl League’s monthly tournaments since last November. With 24 wins and no losses on the year in the grades 7 & 8 division, no other school’s team can come even close. The closest any other team has come is the Brown City B Team that narrowly lost to Sandusky A on February 2nd in Marlette by a final score of 130-120.
While Sandusky High’s A team was without two of its senior players last fall during the school’s successful football season, SHS is now undefeated over the first six tournaments of the Winter 2016 season with a record of 18 and 0.
The return of senior Tate Larson and junior Grant Sheridan have added the extra boost the team needed to take on the Bad Axe A team that won the Fall TAQBL season with no losses. Bad Axe A and Sandusky A are currently in a weekly battle to see whom can come out on top. Sandusky’s only loss this season was in a non-league quiz bowl invitational in January where Bad Axe defeated Sandusky in the championship match.
According the TAQBL Director, Bruce Irland, “Both Sandusky and Bad Axe have the potential of going all the way at the State Championships in April at MSU. A lot will depend upon their placements in the tournament which are set just prior to the tournament. Teams play all day on Friday of the competition until their first loss and an eventual “winner” is determined for the first day of the event. All other teams are seeded in a “loser’s” bracket for the second round of the competition on Saturday with that day’s “winner” facing off against the previous day’s “winner” in order to determine the State Championship in Class C/D”.
“It’s a grueling, but exciting tournament to be able to play in,” according to Irland. “Teams must win a local or regional tournament in order to be invited to the State Championship. Locally, only Sandusky, Bad Axe and Brown City have qualified to take part in April. Last year, the Marlette High team made it all the way to the State Championship match and just narrowly losing to a Lansing area home-school team. While other teams from Sandusky, Harbor Beach and Marlette have won 2nd or 3rd place trophies at the state tournament, the only Thumb area teams that have ever claimed a State Championship were North Branch and Brown City back in the 1980’s and early 1990’s.”
Eighteen high school teams get back to action this week with a Thursday afternoon tournament hosted by Bad Axe High. The middle school league meets once again on March 1st with teams from Almont, Brown City, CPS and Marlette traveling to Sandusky to compete for academic top-honors amongst the 7th/8th grade and 4th/5th/6th grade divisions.
For more information on the Thumb Area Quiz Bowl League, check out their Facebook page or contact the League Director, Bruce Irland, at quizbowlguy@gmail.com