The Sandusky City Council held a public hearing on Monday, July 6, 2015 to discuss and set the millage rate. The millage rate for Sandusky is currently set at 19 mills, but the City Council has been discussing the possibility of lowering the millage since their June 1 meeting. The council agreed that the City is in a good enough position to lower the millage rate to 18.9 mills.
The Council agreed that it is not a large sum of money, but is confident that it is the right decision.
“It may only save some households five dollars, but it’s better than going up five dollars. I think we’re headed in the right direction,” Councilman Harris said.
“It sends a good message,” fellow Councilman Williamson agreed.
The entire Council agreed that though it seems like an insignificant amount, the small decrease in millage is a gesture of goodwill offered to the community and will lead the City of Sandusky in a positive direction, hopefully resulting in a continuance of lower millage rates in the future. 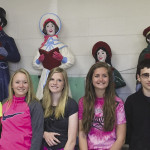