The old cliche’, that defense wins games, was certainly the case Thursday night when the Sandusky Redskins opened their season by hosting USA in a non-conference battle.
After leading for much of the game, the Redskins fought back to take the lead late and held the Patriots from a possible winning scoring drive in the closing seconds to clinch the dramatic 28-22 win.
On a fourth down and goal, with the ball resting on the Sandusky four yard line for USA, the Patriots had one last chance, with just 0:08 remaining in regulation.
USA attempted to run a sweep around left end to the corner of the endzone. However, standing there waiting for the play was Redskin senior defensive back Casey Hyatt. He made a diving tackle, dropping the Patriot running back short of the goal line to secure the win for Sandusky.
It was the ‘Skins offense that took charge early, scoring at the 3:34 mark of the opening quarter on a five yard jaunt by senior Chase Tucker.
Brandon Potter’s first of four extra point boots was good for a 7-0 lead. Tucker broke free on a 13 yard race to pay-dirt in the second quarter to run the ‘Skins lead to 14-0 before the Patriots could get on the board before the end of the first half.
Sandusky’s offense, behind the running of Tucker and Joe Stone, continued to click early in the second half. Stone capped a long scoring drive for Sandusky by bulling his way in from the one yard line with 4:41 showing on the clock in the third quarter.
USA responded with a pair of touchdowns in the third quarter to take a slim 22-21 lead entering the final period. The two teams battled back and forth, unable to score until the closing seconds. Tucker put his team back in the lead with 5:57 to go, scoring from 23 yards out. The score was set up by a 40 yard gain by Tucker two plays earlier.
USA responded with a pair of big plays, picking up a crucial first down with just over one minute to go in the game, setting up a new set of downs from the Sandusky 18. The Patriots gained another first down inside the 10, where the ‘Skins held them on four straight plays, including the final game clincher.
Tucker finished the game with three touchdowns and gaining 185 yards on 26 rushes. He also had three catches for 14 yards. Wray Devault picked up 43 yards on seven carries and Stone finished with 28 yards on six rushes. As a team, the ‘Skins rushed for 253 yards on 41 carries.
The Patriots gained 221 yards rushing and added another 78 yards passing.
This week, Sandusky will battle GTC-West foe Reese at home Thursday night before hitting the road the following week with a non-league game against a much-improved Bad Axe squad. The following week, September 18th, Sandusky will host defending GTC-East champion Harbor Beach as they open league play.

Previous Story:
Gridiron action is back 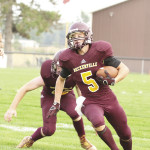 Next Story:
Eagles soar to win over Cardinals