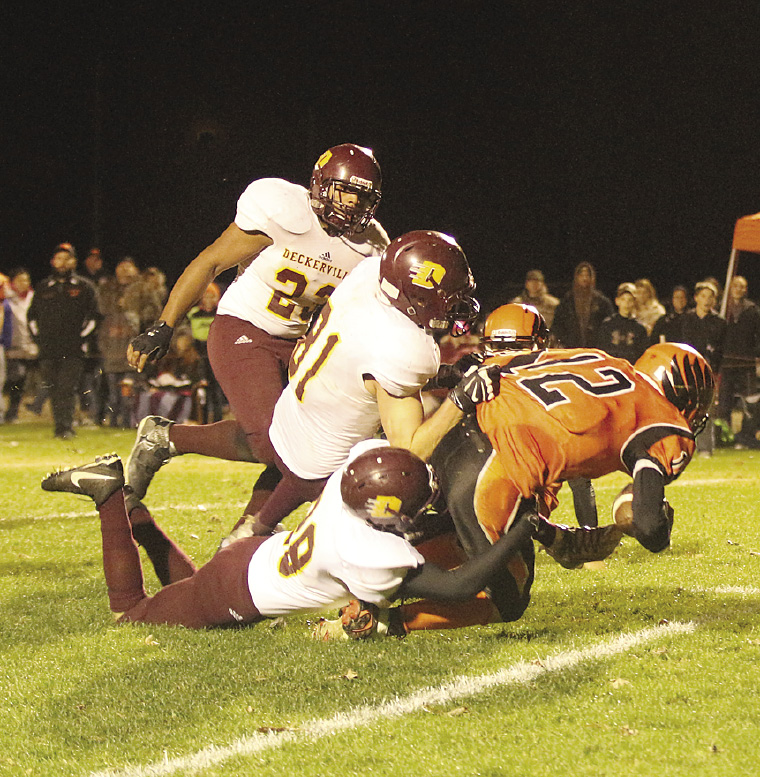 The Deckerville Eagles got their second chance to play against Morrice on Friday night, and they got their revenge on the Orioles, defeating them 40-20.
Deckerville’s defense held the Orioles scoreless in the first half, and the Eagles offense scored three times.
In the first quarter, Brandon Pattullo scored the lone touchdown on a 46-yard run for a touchdown. The PAT failed. Austin Spaetzel got the first touchdown in the second quarter, on a 21-yard pass from Pattullo, with the PAT failing. Jared Philpot scored the next touchdown on a 7-yard run, with the PAT failing. The Eagles led 18-0 at the half.
Both teams scored once in the third quarter, the first by the Orioles on a 48-yard run by Nick Hart. Deckerville’s Brandon Pattullo scored the next touchdown on at 4-yard run. Neither team got their PAT. At the end of the third the score was Deckerville 24, Morrice 6.
The fourth quarter started out with a Johnathon Ridley 36-yard pass from Pattullo for a touchdown, with a good PAT run in by Spaetzel. The Orioles answered back, on a 12-yard pass, with their PAT also being good. The Eagles scored their last touchdown of the night on a Jared Philpot 5-yard run, with Wade Saldana PAT. The Orioles finished the quarter with an 11-yard pass for a touchdown, the PAT failed.
Deckerville had 17 first downs, rushing 55 yards for 344 yards, the Eagles were 7-9 passing for 99 yards, for a total of 443 yards. The Eagles fumbled twice, losing one. Brandon Pattullo led the Eagles rushing 25-170, Jared Philpot 14-80, Austin Spaetzel 5-58 and Austin Fritch 12-36. Deckerville had 5 penalties for 45 yards.
Morrice was held to nine first downs, were 11-49 on the ground and were 19-29 passing for 209 yards. They had one interception. The Orioles had 5 penalties for 50 yards. The Orioles were led by Nick Hart rushing, 9-49.
Coach Bill Brown said, “Defensively, we played well. We shut down their best receiver, which was key to the night. Offensively, we moved the ball well. The special teams did their job.”
The Eagles will leave Deckerville Saturday morning, traveling to Battle Creek to take on the Fighting Tigers, (who have been ranked #1 all year), with game time at 2:00 p.m. The Tigers have an artificial turf field, so Deckerville will go to Marysville on Wednesday to practice on their field.
A spectator bus will be available for Eagle fans, if 30 people sign up. Cost is $5, plus the cost of the ticket to get into the game. A list for sign up is in the high school office. The spectator bus will leave at 9:00 a.m. Those wishing to ride the spectator bus must sign up by 3:00 p.m., Thursday.
The championship game will be held on November 20, with the winner of the Cedarville and North Central game taking on the winner of the Deckerville – St. Philip game. 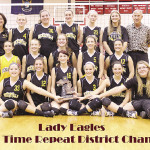 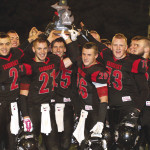