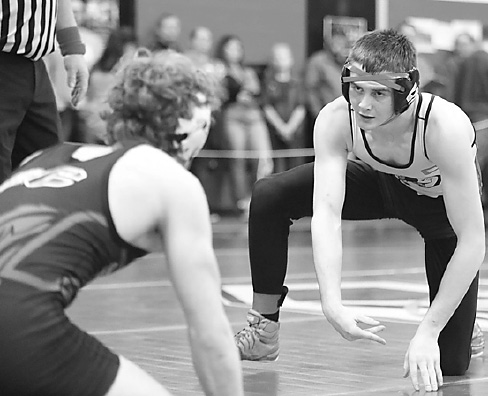 The Redskin Wrestlers had a great day at the MHSAA Region 15-4 at Clinton High School. The Redskins tied a record from 1982 sending 4 wrestlers to the MHSAA State Finals.
Senior Cody Hartz brought home a Regional Championship, winning a tight 6-3 match over Jeff Konz of Clinton in the 152 lb. Finals. Cody has a great attack from his feet, and I think he really shocked Konz with a takedown right off the whistle. From there it was back and forth, so that takedown was key. Hartz, now 47-3 on the season, will take on Trevor Matson of St. Ignace in the first round.
Senior Anthony Filkins placed 2nd in the regional at 215 lbs. on Saturday. He had a pin and a tech fall over Flint Hamady an Napoleon in the first two rounds. In the finals, he had a rematch with Logan Badge of Clinton, falling 13-0. It was a much better match than the score indicated. Anthony really controlled the 3rd period, and I think has some things figured out against him. Filkins, now 41-4 on the season, will take on Johnny Gregory from Centerville in the first roud of the MHSAA Finals.
Senior Tim Eagle had a great showing, placing 4th at 135lbs. After placing 4th at districts last week, he had a tough road to get to State Finals. After dropping his first match, he picked up a 5-2 victory over Jaden Dietz of Dansville. In the blood round, he found a familiar opponent in Cody Haden from Marlette. Tim had a better gameplan this time against Hayden. He pushed the pace of the match, and had a nice come from behind victory to make it out of regionals. Eagle will take on David Johnson of Houghton Lake in the first round of the finals.
Freshman Chase Hartz had a historic day, placing 4th and becoming the first Freshman State Qualifier for Sandusky. Chase did a great job not letting the pressure get to him. He won his first match of the day, and then had a tough loss to George Ames of Clinton in the 2nd round. He bounced back with a win over Brian Stickland of Memphis 15-2. He dropped the last match of the day 9-2 to Logan Kehres of Dansville. Chase has amazed me all year with his poise. He has worked really hard all year to make this happen. Hartz will take on Hunter Heath of Niles Brandywine in the first round at the MHSAA Finals. 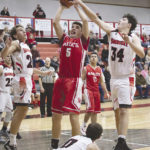