BY SETH STAPLETON
TSA Sports Writer
SANDUSKY – A game full of runs ended with one final flurry at the second annual Thumb Sportswriters Association Girls All-Star Basketball Game at Sandusky High School Friday night.
The East All-Stars used that big run to pull away for a 56-44 win over the West All-Stars.
Tied at 40-40 with 5:45 left in the fourth quarter, the East got back to back three-pointers from Brown City’s Skye Willer to go up 46-40. Willer’s triples would kickstart a 16-4 run to close the game for the East, turning a tightly contested game into an easy win.
East coach Jay Green, of Kingston, said his team’s plan was to spread the West out on defense. Down the stretch, the strategy proved successful.
“We made a lot of shots — we made a lot of outside shots,” said Green. “I think that kind of was the difference in the game — our shooters stepped up tonight and made some shots and made us hard to guard.”
The East made seven shots from long distance in the game and had a balanced offensive attack, led by the game’s MVP Jamie Weber, of Harbor Beach. Weber finished the game with 13 points.
“I didn’t even know they did that, but it was really cool to get it,” Weber said of getting the honor. “I thought we played well. We had a good team.”
Added Weber, “It was fun. It was really cool playing with a bunch of girls who are your biggest rivals. It was nice being teammates with them.”
Weber teamed with Croswell-Lexington’s Megan Guitar to anchor the inside for the East. The duo helped limit West mega-talent Reyna Frost, of Reese, to 16 points on the night.
“I thought Megan Guitar and Jamie Weber inside were able to body her well and were able to keep her under control a little,” Green said.
Despite the attention, Frost was still able to put together a stellar effort, adding eight rebounds and six blocks to her game-high 16 points. West teammate Sam Ewald scored 16 points and five rebounds.
However, it was the balanced East squad that ruled in the end. To go with Weber’s 13 points, both Willer and Carsonville-Port Sanilac’s Katelyn Frostic tallied nine points and Guitar and Sandusky’s Brooke Krueger each added six points.
“It’s quite an honor to be in a showcase like this for their last senior game and it’s nice to see such a huge crowd here tonight to witness it,” Green said. “It’s a great event for Thumb basketball.”
Adding to the festivities was a very-competitive three-point contest. In a shootout between Sandusky’s Keegan Nelson, Caro’s Melissa Cockerill and Frost, it was Nelson who prevailed with a make at the buzzer to win by one.
“I could not have been more pleased with how well the games went this year,” said TSA President Paul Adams. “The entire night went very smooth and that was largely due to the efforts of Sandusky High School and the TSA members. Also, Clark Ramsey did a terrific job with the pacing of the event.”
Added Adams, “The games and the contests were fantastic and a wonderful showcase for the Thumb’s senior basketball players.” 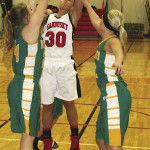