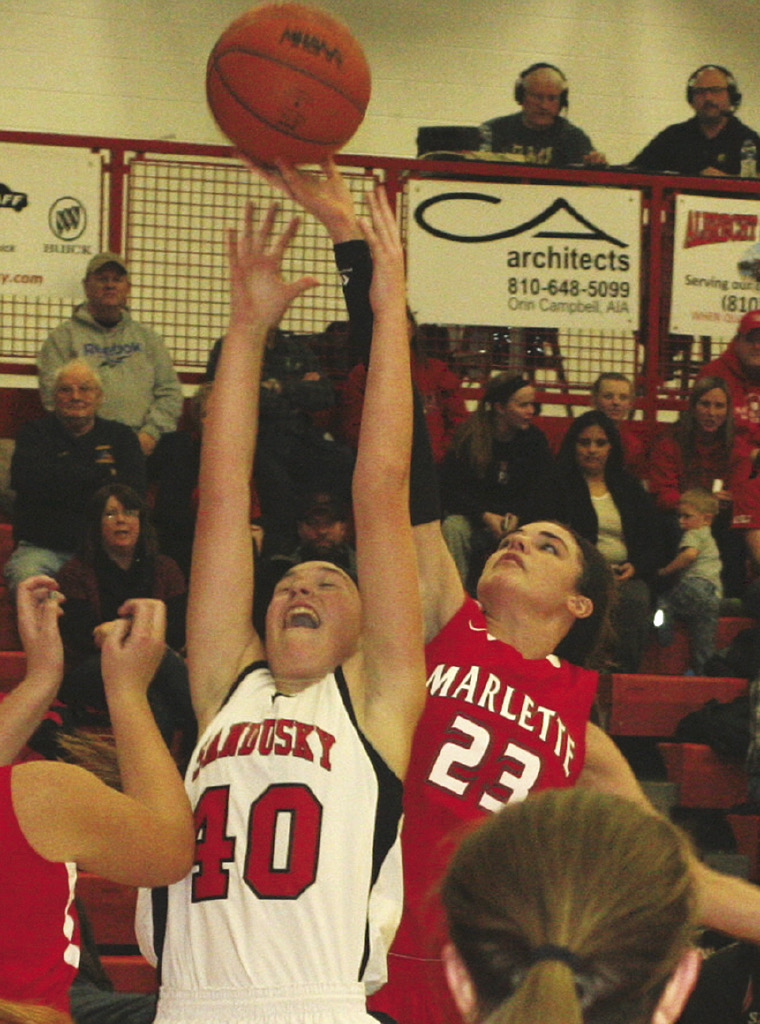 With the end of the regular season now within view, the Marlette Red Raiders girls squad is hoping for a strong finish. Especially after last week’s action. Marlette gave a solid effort, playing aggressive basketball, in knocking off league rival Sandusky 42-35 at the Mark S Hund gymnasium and Al DeMottt court. Marlette had handily defeated Sandusky earlier in the season on their home floor.
With the win, the Lady Red Raiders sit alone the top of the league standings with a perfect 7-0 mark while Sandusky slips to 5-2 in the GTC-East. The game featured the return of Sandusky standout Jill Kursinsky who had missed the season to this point, with a back injury.
“I was real proud of all the girls tonight,” Marlette Coach Cathy Storm said after the game. “We played an aggressive style of basketball and took it to them and we played some great defense. It’s pretty unusual to beat Sandusky, let alone twice in one season and, on their home floor. This one was pretty special.”
Marlette took an early 4-0 lead before the Lady ‘Skins knotted the game on buckets from Madysen Jansen and Haley Nelson. Haley Cross, who had four points in the opening quarter for Marlette, gave her team the lead with a hoop inside the paint late in the first quarter and Marlette never trailed the rest of the way. The two teams played to a 10-10 tie after one quarter after the Sandusky one-two punch of Jansen and Nelson kept their team in the game with baskets.
Caitlin Quade quickly set the stage for a Marlette lead, canning a long triple that rattled in and then nailed a shot jumper in the lane, giving her team a 15-10 lead. Nelson answered with a putback off the glass, trimming Marlette’s lead to 15-12 only to see Quade nail another trey for a 18-14 Marlette advantage. The Lady Red Raiders finished the first half on a 8-4 run to claim a 23-16 edge at the intermission.
“I thought we did a nice job on the boards,” Storm pointed out. “We didn’t give them a lot of second chances at scoring. We stayed aggressive on both ends of the floor.”
The two teams played nearly even in the third quarter with the visitors grabbing a 7-6 advantage and Sandusky, on three triples, took a 13-12 edge in the fourth but ran out of time in mounting any kind of comeback bid.
Cross and Emily Schaub took charge for
the Lady Red Raiders in the fourth quarter, tossing in 10 of their team’s 12 points to seal the win. Schaub was 3 of 5 from the line and finished the game with 10 points, along with Quade who scored all of her’s in the first half. Cross led the Marlette scoring with 14 points and grabbed six rebounds.
Jansen led all scorers with 16 points to lead Sandusky, 10 of those coming in the second half while Nelson scored 10. The Lady Redskins went 6 of 8 from the charity stripe but shot 26% from the floor, making just 10 field goals.
Sandusky will play host to Brown City Thursday night before venturing north to USA for a GTC crossover game with the Lady Patriots on Feb 16th. On the 18th, Sandusky will stay on the road, returning to GTC-East action with a key matchup at Harbor Beach. Meanwhile, Marlette, who appears to be in the drivers seat for the league title, will be at Harbor Beach Feb 11th and return home for back to back home dates with Bad Axe and Memphis on the 16th and 18th. 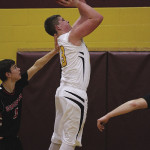