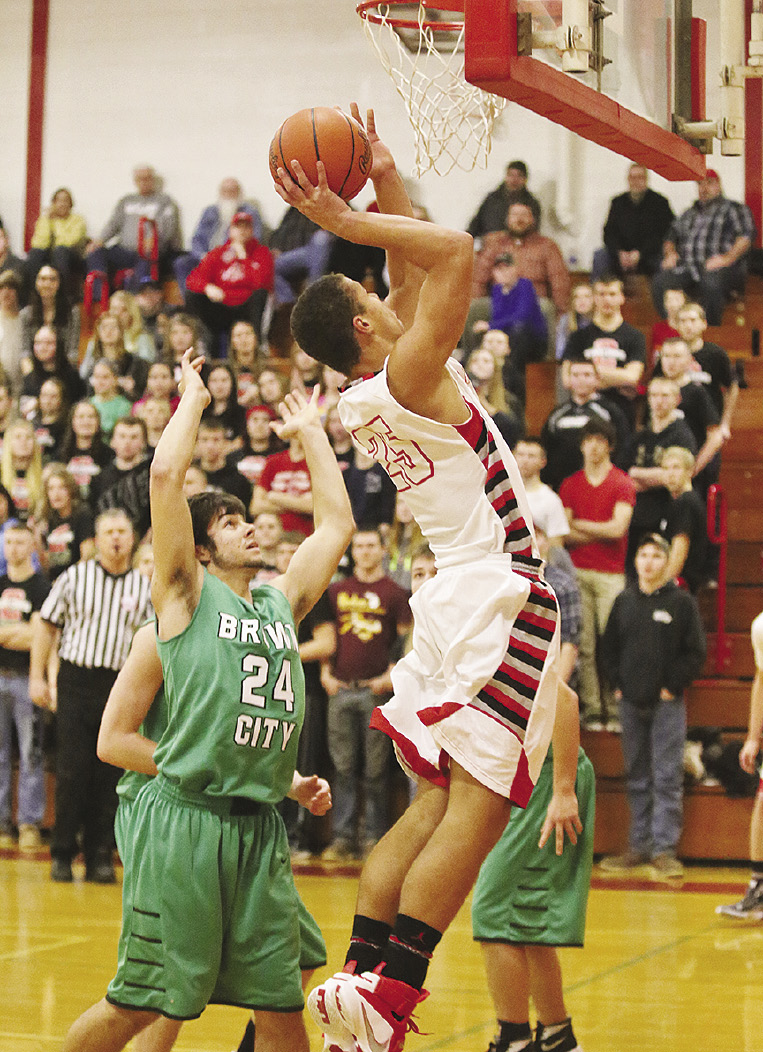 It was an emotional night for both sides Friday night, as both Brown City and Marlette took time prior to tip-off to honor the memory of Connor Burton. Connor passed away at a young age and was an avid hoops fan of both squads.
Once the GTC-East match-up of local rivals began, the Green Devils came out firing to take an early lead. The Red Raiders were able to maintain their patience and rallied in the second to pull out a 64-51 victory.
Brown City grabbed the early first quarter lead, 15-11 thanks to the three ball. Senior Andrew Storm, who finished the game with four triples, helped keep Marlette in the game with some timely shooting, as did Isaac Dale. The two teams played to a 12-12 standoff in the second standoff, giving Brown City a 27-23 lead at the half.
Marlette’s offense started to click in the third, pumping in 22 points and taking their first lead of the contest, 45-42, after three quarters of play. The Red Raiders, who shot 60% on two point shots and were 5 of 10 from three point land (50%) put on strong defensive pressure and outscored Brown City 19-9 in the final eight minutes of play to seal the league win.
Storm (three assists) led the winners with 28 points including a 3 of 4 effort from three point land and connecting on 5 of 7 free throws. Dale pumped in 13 points and snagged nine rebounds and Barrett George added nine points. Hunter Kelly had six points while Ethan McKenney finished with five points and hauled in six boards. Marlette shot 62% from the free throw line, converting 13 of 21 tries. Brown City made 12 of 25 three point attempts (48%), most of them coming in the first half and shot 75% from the charity stripe, netting 9 of 12 attempts. No individual stats were available for the Green Devils.
In other action last week, the Red Raiders dropped a GTC crossover game to the Reese Rockets, coming out on the short end of a 64-56 final score. Marlette took a slim 16-15 first quarter lead over the Rockets, only to see Reese take a 36-32 halftime lead with a 21-16 edge in the second quarter. Free throws were the Rockets’ best friends, as they converted 17 of 21 attempts (81%) to help sway the game their way. The Red Raiders were outscored 28-24 in the second half.
Storm paced the Marlette scoring with 18 points to go along with three assists, eight rebounds and had four blocked shots. McKenney tossed in 15 points and added three assists and four boards and Barrett George had seven points and two steals. Dale had six points and three rebounds and Sean Quade finished with