‘Skins rebound with win over Bearcats

After a sound 65-51 whipping at the hands of the Bad Axe Hatchets, the Sandusky boys basketball team got back on the winning track with a solid 55-29 win over Ubly in GTC-East action Friday night.
In their win, eight Redskin players broke into the scoring column. The winners jumped out in front in the first quarter 14-4 and kept the defensive pressure on all night, limiting the Bearcats to single digit scoring in all four quarters.
Sandusky held a 27-12 halftime lead and were on top 44-21 after three quarters of action. Three Redskin players – Cade Seiler, Brandon Potter and Justin Miller nailed three point shots in the third quarter. The team finished the game with five treys.
Senior Danny hale paced the winning scoring attack with 14 points with eight of those coming in the third quarter. Potter (eight rebounds) added 11 while Seiler and Josh DeKam chipped in with eight points each.
In the Bad Axe contest, Sandusky had no answer for the Hatchets Tommy Morneau. Perhaps the top player in the Thumb area, Morneau put on a dazzling offensive display. He fired in 10 first quarter points including a pair of three point shots and added 11 more in the third quarter, finishing the game with 31 points. By the time the game had finished, he had eclipsed the 1,000 point scoring plateau for the Hatchets during his high school career.
The Redskins were as cold as the weather outside to start the game, managing just four points in the opening period of play. They went over six minutes of the second quarter without scoring a point and trailed 31-14 at the break. Bad Axe built a 20 point lead (50-30) after three quarters, thanks to Morneau’s hot shooting.
Senior guard Justin Miller paced the Sandusky scoring with 15 points, all on three point shots, while Potter added 14 and Danny Hale tallied seven. The Redskins netted eight three point shots in the game and were 7 of 12 from the free throw line. 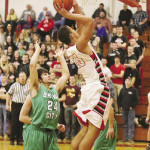 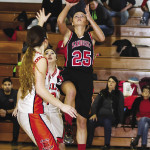