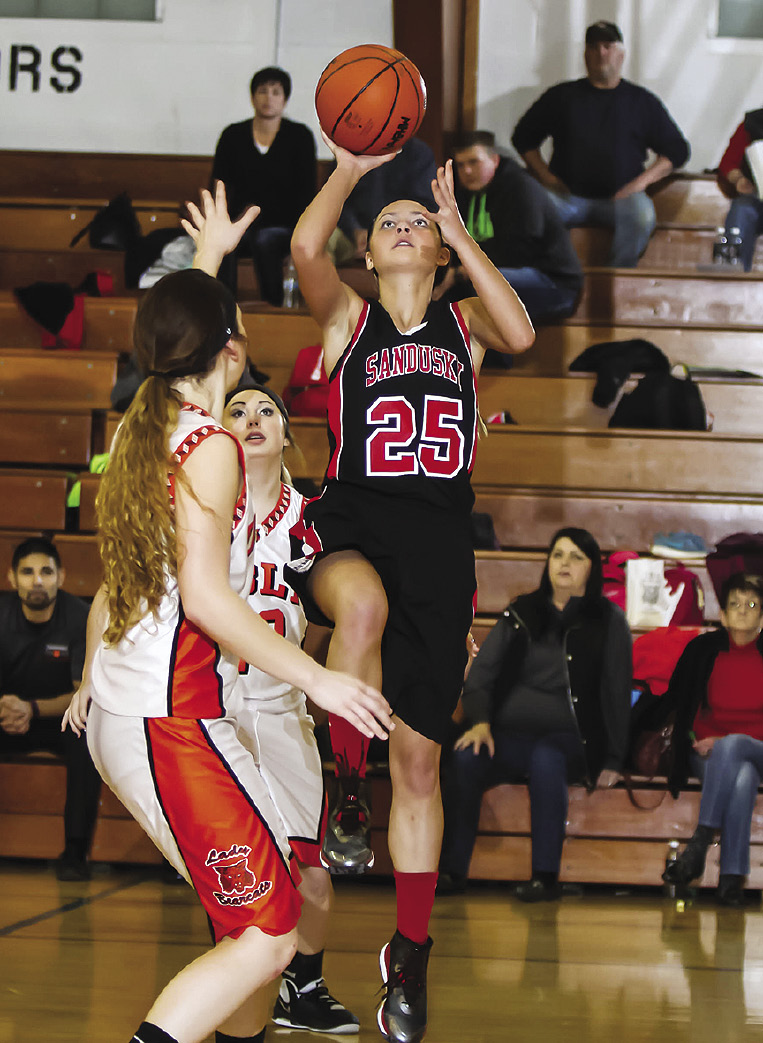 Since an early loss to Marlette in a key GTC-East showdown, the Sandusky Redskins vowed to play better as a team and so far, it seems to be working. Bad Axe and Ubly became the latest victims in the Lady Redskins nine game winning streak.
Behind a double-double by sophomore guard Madeysen Jansen, Sandusky cruised to a lopsided 58-26 win over Ubly Thursday night. Jansen had a well rounded game, firing in 14 points, grabbing 10 rebounds, dished out five assists and had three steals.
“It was another great team effort,” said Sandusky Coach Al DeMott. “Madysen and Gabrielle (Gough) played really well. We shot the ball well from the floor and were perfect from the free throw line. We had a run there near the end of the first half where we outscored them 17-0 to blow it open.”
Having raced to a 17-9 first quarter lead, the Sandusky defense put the clamps on Ubly in the second quarter, holding them scoreless to take a commanding 30-9 lead at the intermission. A 28-17 second half advantage spelled victory for the visiting ‘Skins.
11 Sandusky players scored in the game, led by Jansen’s strong performance. Haley Nelson was close behind, fighting off foul trouble to score 13 points (nine in the first quarter) to go along with four rebounds and three assists. Gough, a Sandusky freshman, fired in 10 points, snagged nine boards and had five blocked shots. Ally Blank and Leah Rourke contributed to the cause with three rebounds and three steals apiece.
In their 55-39 whipping of Bad Axe, Jansen and Nelson combined for 11 of their team’s 15 first quarter points to take an early 15-9 edge. Nelson continued her strong play in the second quarter, pumping in nine more points from the post position to boost her team’s lead to 29-21 at the intermission. A pair of 13 point quarters in the second half sealed the win for Sandusky as Coach DeMott was able to give role players plenty of floor time.
“We played a great all around game on both ends of the floor,” DeMott pointed out. “We did a good job pushing the ball up the floor and were able to score on some nice fast breaks.”
Nelson had a great night offensively, ripping the nets for 23 points and hauling in four boards. Jansen tallied nine points along with nine rebounds and eight assists while Cierra Phillips scored seven and Lacey Nielson added six.