The Sandusky and Marlette track teams took part in last week’s Marlette Invitational that was stacked with talent from throughout the Thumb.
Sandusky sprinter Bryan Ross had a solid day for his team, placing third in both the 100 and 200 meter dashes in times of 12:18 and 24.69 respectively. Marlette’s Chase McGinnis was seventh in the 100 meters with a 12:42 and Sandusky’s Delorrin Wedge was eighth, finishing in 12:51.
Redskin speedster Jake Sheridan garnered points for his team in the 200 meter dash, taking an eighth place finish in 25:52 while Drew Orchard was ninth in the 1600 meter run, stopping the clock in 5:21.24.
Matt Walker hustled his way to a sixth place finish in the 110 hurdles, finishing in 19.05 while teammate Matt Carslon was 11th in the 300 meter hurdles, with a time of 48.39.
The Marlette 4 x 200 meter relay team consisting of Ian Schetter, Kody Gould, Chase McGinnis and Logan Solgat earned a fourth place crossing the line in 14:15.8. Sandusky’s 4 x 400 meter relay squad of Braxton Washe, Kyle Campbell, Jack Sheridan and Bryan Ross was sixth finishing in 3:58.9.
Washe also enjoyed good success in the shot put, taking a second with a heave of 46’6 while Marlette’s Kody Gould was 4th in the long jump with a leap of 18′ 3″. 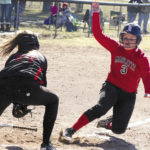 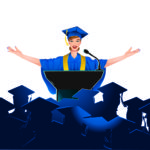