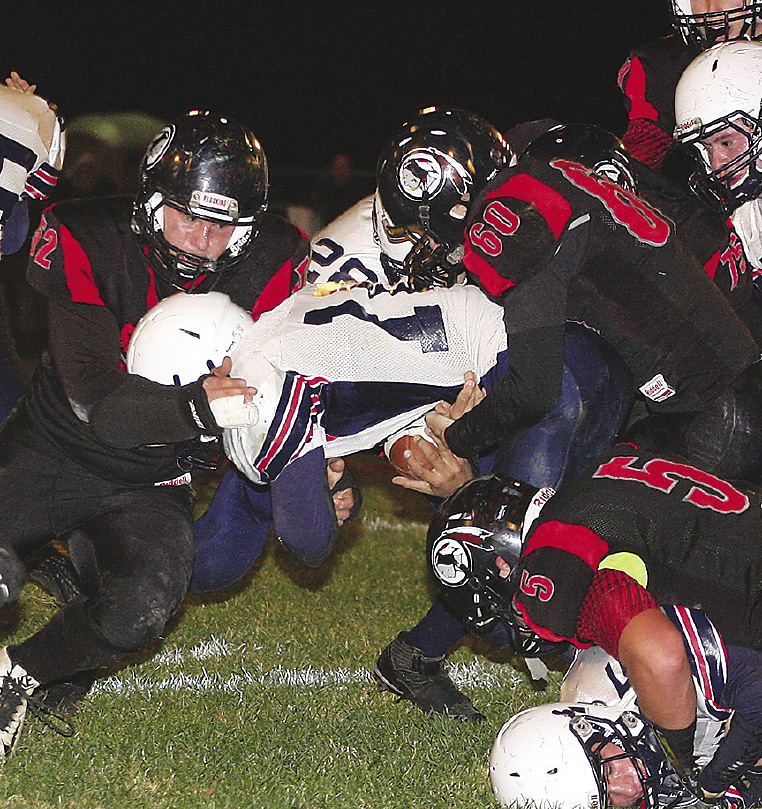 Another dominating defensive effort helped spark Sandusky to their 10th consecutive win of the year, a 35-0 thumping of USA in the opening round of the play-offs. It was Sandusky’s second consecutive shutout win of the year.
The GTC-East champs will collide with GTC crossover foe Cass City in the district finals Friday night at Woodard Field. Kick-off time is set for 7:00 p.m. The Red Hawks come in to the finals riding a four game winning streak including a 34-6 opening round post season win over Ubly.
The Redskins wasted little time in grabbing the early lead when Casey Hyatt punched it in from seven yards out early in the first quarter. Senior running back Chase Tucker made it a 14-0 when he broke free along the near sideline. Both scores came on the Redskins first two offensive possessions of the game. Tucker side-stepped two USA defenders to his left and sprinted 76 yards to the endzone. Hyatt scored his second TD of the night, breaking free on a 36 yard score to cap the first quarter scoring on a fourth down play.
Tucker, the proud new owner of the Sandusky all-time touchdown record for a single season, raced 18 yards to the west end zone for his second score of the night before Joe Stone finished off the Sandusky offensive show with a nine yard TD run. Brandon Potter booted all five extra point kicks.
Tucker finished the game with 134 yards rushing on just 10 carries while Hyatt gained 123 yards on only eight tries and Stone had 41 yards on seven carries.
As a team, the Redskins tallied 311 yards on the ground on 31 rushes while the defense gave up 129 yards. The only Patriot offensive scoring threat was thwarted deep in Sandusky territory when Hyatt made a diving interception near the goal line.