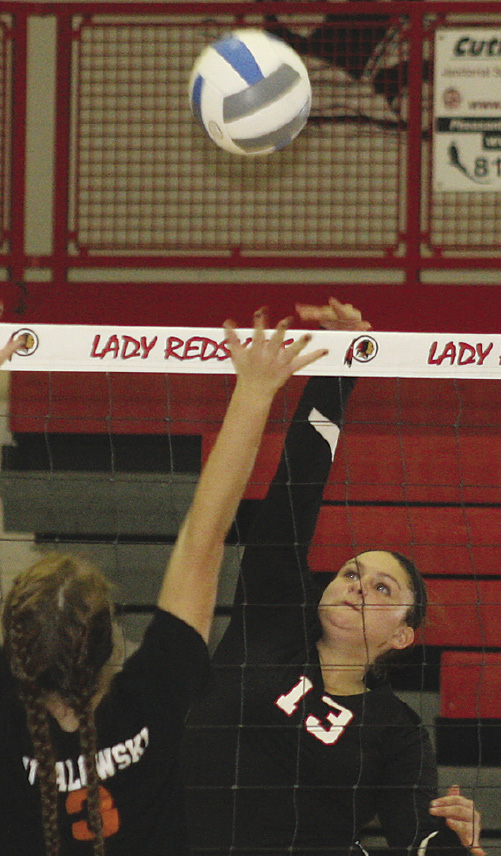 Despite their fourth place finish in the GTC-East this past season, the Sandusky volleyball team has plenty to be proud of and a bright future ahead of them. The Lady Redskins finished the season with a 12-11 and 7 overall mark and were 4-6 in league play.
Among their accomplishments this season was the fact the squad defeated Ubly for the first time in 22 years. The Bearcats have had a long winning tradition, but Sandusky caught them on a down night when one of their players suffered a freak injury during warmups that prevented her from playing.
Sandusky also put on a fine showing in district tournament action, knocking off New Haven in a five game thriller and rolling past host Capac to earn a spot in the Class C title game against Brown City. BC not only cruised to a district title over Sandusky, they went on to capture a Regional crown and are playing this week in the Class C quarterfinals.
“It’s been a great year for us,” said Coach Angie Blank of the Sandusky gals. “We have a lot of underclassmen who have worked hard and came together as a team as we went along. I am really proud of the whole team. It seemed like as the year went along, we just kept getting better and better.”
Final season stats saw Sophomore starter Callie Jacobson led the Lady Redskins with 172 service points and tallied 285 assists from her setter position. Jacobson was a 1st team setter on the GTC-East squad in her firsts year on varsity.
Another sophomore, Mady Jansen, scored 170 points, including 29 aces to go along with her 10 blocks and 14 assists earning her All-Conference honorable mention. Rounding out the top three in scoring was junior All Blank (honorable mention GTC-East) who had 122 points and was one of the team’s top back row players, digging out 195 shots.
Action at the net was dominated by juniors Jess Kursinsky and Katelyn Patterson along with sophomore Haley Nelson. Kursinsky finished her season with 76 kills and 51 blocks and landed honorable mention All-Conference honors, Patterson had 34 kills while Nelson, a second team All-GTC East middle hitter, led her team, smashing 136 kill shots and 59 blocks.
In addition to their accomplishments on the hardwood, Coach Blank pointed out the team was able to raise $1,200 at their 2nd annual Boys Powder Puff Volleyball math. The money was dona a local 18 year old who is battling Hodgkins Lymphoma cancer.
“I would say the future looks very bright for these girls,” Coach Blank concluded. “I have loved coaching them. They are a great group of gals that I am so proud of. They worked hard and were determined to get better as a team. I feel we did that.” 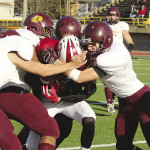 Next Story:
Memorable season comes to an end for Redskins