Deckerville Community Schools has announced the 2015 Valedictorians: Sarah Barker, Jadelyn Bradley, Jordan Cleland and Tess Schulz all with a GPA of 4.0, and Salutatorian Jennifer Stone with a GPA of 3.980.
Sarah M. Barker, Valedictorian, is the daughter of Tom and Diane Barker of Palms. She is a recipient of Central Michigan University’s Premier Merit Scholarship Honors Competition – “Centralis Gold Award”. She was voted by her teachers and peers as a representative for the DAR Good Citizen Award and went on to win the regional award. She has participated in volleyball and received honors as a 1st team and honorable mention in the NCTL selection, Blue Water Area Team as honorable mention, All-Sanilac County 1st team, Huron Daily Tribune 2nd team, All-Thumb 2nd team, and All-Region. She also participated in basketball and received 1st and 2nd team honors in the NCTL and All-County honorable and special mention. She participates in softball, and has for the past four years and has been selected 1st and 2nd team in the NCTL and received All-County honorable mention. She is a member of the National Honor Society and has been for the past three years, which she currently holds the president position. She is currently the class vice-president and has been for the past four years. She has been a member of the English Academic team for four years and is currently the school newsletter editor. She is a four-year academic honor student. She has placed 2nd in the Right to Life Oratory contest and has been a VFW Voice of Democracy speech contest winner the past three years. She has also been an SC4 dual enrollment student the past two years. She plans on attending Central Michigan University as an honors student majoring in meteorology, minoring in broadcast and cinematic arts. Her plans are to become a broadcast meteorologist, and she would like to coach basketball or softball or both. 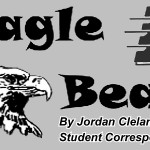