Deckerville students will be plenty busy in the weeks ahead with exams, basketball games, and winterfest activities. Winterfest court was announced last week. The seventh grade representatives are Chase Simkiss and Amaya Cortimilia. Joe Davault and Rachel Brown will be representing the eighth grade class. Lucas Asher and Taryn Kunze will represent the freshman class while Brenden Handley and Cassidy Staple represent the sophomore class. Johnathon Ridley and Ally Shepherd are representing the junior class. Senior girl representatives are Katie Romzek, Kara Giruad, Nicole Stolicker, and Karyn McConnachie. They will be escorted by Colton Palmer, Cody Mosure, DJ Fritch, and Jonathon Thompson. The winterfest game is February 5th against Dryden. Congrats to everyone who made it on to winterfest court!
Boys basketball had an interesting week last week. They lost to Brown City last Monday 48-58. The final score doesn’t tell the entire story for this game. While the boys didn’t come out on top, they played an impressive game. Strong competition like Brown City helps the boys prepare for challenging post-season games. The boys also played in Caseville on Thursday. They came out of this game with a win and a final score of 51-45. The boys have one game scheduled this week. It is on Wednesday in Harbor Beach.
Girls basketball had a rather boring week; they had one game last Friday in Caseville. The girls took on the Caseville Eagles with ease and the final score was 52-30. The girls have no games this week. The day before Winterfest (February 4th) the girls will play a Pink Out game. Proceeds will go to the American Cancer Society.
This week is the week all students have been dreading for weeks: exam week. Exams will be January 26th-29th. Seventh hour exams will be Tuesday. Fifth and sixth hour exams will be Wednesday. Third and fourth hour exams will be Thursday. First and second hour exams will be Friday. While this does sound like a long week, school will be dismissed at 12:15 on Thursday and Friday.
The National Honor Society has a Boston trip planned for April 20th-24th. Because of the lack of participants, this trip has been opened up to any high school students that wish to go. Registration and the first payment is due January 31st. You can register online through GerberTours.com or fill out a form available through Ms.Kandler. Ten more students are needed for the trip to be possible. There are also fundraisers to help with the cost of the trip. Currently the students are selling seeds and a spaghetti dinner is planned for later in the year. 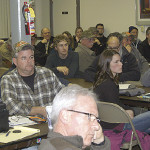