This last week in Deckerville sports has been a whirlwind of emotions both good and bad. Fall sports have slowly came to a close starting with volleyball. Last Tuesday, our varsity volleyball girls traveled to Owen-Gage to play their first regional game against Marine City Cardinal Mooney. Both teams came out with fire beneath them and wanted nothing else but to advance further into play offs. Our Deckerville girls battled three games before being defeated by Cardinal Mooney. Even so, these games were not complete losses. While the seniors held their ground, the underclassmen really stepped up and showed their skills. Overall, Deckerville varsity volleyball had a great season. They had a final record of 15-2 and gained their ninth district title. Amazing season girls!
Last Saturday, boys varsity football team traveled to Battle Creek to compete against Battle Creek St. Phillip in semi-finals. Even though the game ended in an eagle defeat, (score of 52-24) our boys played their hearts out and left everything on the field. The boys have nothing to be ashamed of with an overall record of 10-2. They’ve learned from their mistakes throughout the season and met every challenge they’ve come across head on. This loss is just another mistake to learn from and our boys of fall will come back stronger than ever next season. Great season boys!
As fall sports end, winter sports begin. That means the beginning of Deckerville basketball! Both boys and girls basketball is underway. Currently both teams are in the worst part of their seasons: conditioning. Right now, the teams barely even touch a basketball. While the teams aren’t thrilled about the running and conditioning now, they’ll be thankful for it when they can make it through four quarters of a game. Basketball games won’t start until December.
As of last Monday, Deckerville is officially in the second marking period of the semester. Students, I promise this half of the semester will go by much faster than the previous one. The students had a three day weekend because of parent teacher conferences on Monday. Next week is only a two day week due to Thanksgiving break starting on Wednesday. After that, it is only a short couple of weeks until Christmas break. We can do this students!
One last thing, the Deckerville Christmas Bazaar will take place Saturday, November 21st the school. There will be booths of almost any craft you can think of! The junior class will be putting on a straw raffle with various possible prizes. So if you find yourself at the Christmas Bazaar this Saturday, stop in at their booth to win yourself a prize! 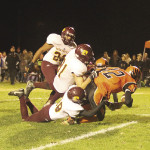 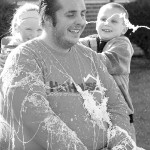