If you have driven through Deckerville the last few months, you would immediately notice a dramatic change in the appearance of Wayne’s Auto and Tire, or what was once known as the Shell Service Station, run by Wayne Salowitz’s dad, Cres.
The building was built by Star Oil in the 1930’s and switched hands more than once – Backus Oil, Jim Jones and Varty’s. But, Wayne and his wife, Sharon, purchased the building from Varty’s around 1975, and since that time it has remained a family run business – doing general auto repairs and selling tires. Wayne employs Jamie Stolicker, a great-nephew of Cres, and Wayne’s son, Brian.
Jamie worked part-time for Wayne in 1984 and became a full-time employee in 1985. Brian attended college for one year, and became a full-time employee in 1995. Wayne previously worked with Al Mater, but they decided to split ways. Cres worked alongside of them, until he was 78-years-old.
According to Stu Stoutenburg, he began working for Cres part-time at the young age of 14, washing cars. He remembers washing George Leckrone’s car every couple of weeks, and said that they charged $2.50 to wash the car, windows and cleaning the interior. And although Stu and Steve Pozsgay (another employee) were both fired from the Shell Station for goofing around, Stu was quick to say that by Cres firing him, he learned the hard way how it is important to have a good work ethic. Stu said that Cres was a good guy to work for, and was a hard worker.
Terry Pohl said that he remembers him and his friends stopping in at Cres’s both before school and going up at lunch hour, getting a bottle of coke and peanuts and a chocolate bun. He said that Cres would stop what he was doing, and make sure that all of the kids got waited on so that they could get back to school before lunch hour was over. Terry said that the kids all loved going up to the station and that Cres treated everyone well.
And even with the recent facelift, that service and friendly atmosphere of the past has remained intact. 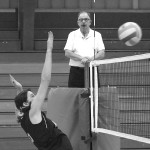