It’s been another progressive week in Deckerville sports. Last Friday, varsity football beat Dryden 52-6. This was the last league game before playoffs, so it was quite the way to end league play. The boys ended the league season with a record of 8-1 and are the 2015 NCTL champions. This Friday, the boys will play against Peck in Deckerville for their first game of playoffs. The boys will have to work hard if they want to make it to state finals. Good luck boys!
Volleyball also had a great past week too, especially on Tuesday. Last Tuesday, the girls traveled to Caseville. A few weeks prior, Caseville had ended the girls’ winning streak and had gone undefeated since then. However, last Tuesday our girls were able to beat Caseville in three games and bring an end to their winning streak. The girls went on to beat Dryden in Deckerville the following Thursday. This week the girls play their last league game home against Peck. The following week marks the beginning of districts. Good luck to the girls as well!
Last Monday, cross country had league at Wagener Park. Both the boys’ and girls’ teams did well and the girls’ team came out as league champs! Last Saturday, the team went to a large meet at Caro and held it’s weight against much larger schools. Kylee Colesa ended up in third place and set her own personal record. Next Saturday is regionals at Wagener Park.
Despite the crazy weather, Cardboard City was a success. Over 60 students participated and were able to collect donations for those who need it most. It was a great turn out and we can hope for even better next year! 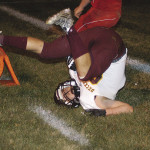 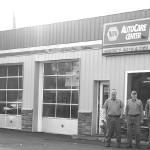