Al Demott made history last Tuesday night in Sandusky when the Sandusky girls helped Al to earn his 797th career win over Vassar, tying Frank Orlando’s record number of wins. Demott made history again on Friday night with a win over Unionville Sebewaing to claim the outright title of Winningest Girl’s Basketball Coach in MHSAA history with 798 wins.
Al Demott has held the position of Head Coach for the Sandusky Girls Basketball program since 1979, and in that time span has racked up numerous District, Regional, and League titles, including a runner up finish at the State Finals in 1999 and a stellar 23-1 record just last year.
The true greatness of Al Demott does not come from his wins, but from his work ethic and commitment to his girls. Not content to rest on his laurels after so many years of success, Al Demott is master of his craft. Al is the first person to arrive at the gym on gameday and the last person to leave. The record may stand at 798 today but, with half a season left to play, that number is sure to grow. 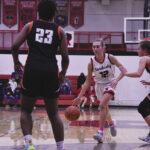 Next Story:
Lady Eagles Win on the Road