Lady Eagles Win on the Road

The Lady Eagles were on the road last week, bringing home two closely matched wins.
The Lady Eagles traveled to Lakers last Monday, bringing home the win by 2 points, 29-27.
The girls led 8-5 after a quarter of play, and 11-8 at the half. Lakers outscored Deckerville, 10-5 in the third, but the Lady Eagles came back stronger in the fourth, scoring 13 points, holding Laker to 9 to seal the win.
Libby Tank led the Eagles with a double double, scoring 11 points and had 18 rebounds. Shelby Flanagan added 8 points to the score, Johanna Kubacki, 4. Mya Garza, Jessie Heilig and Sophia Sanford each contributed 2 points, with Sanford getting 10 rebounds.
Coach Doug Kirkpatrick said, “Lakers outshot us at the free stripe 23-9.”
The Lady Eagles played at North Huron last Thursday, winning by 3 points, 32-29.
The girls had a nice first quarter lead, 11-4, and led at the half, 15-8. In the third quarter, North Huron outscored the Eagles by 1, 9-8 and again in the fourth, 12-9, but the first quarter lead was too much for the Warriors to overcome.
The Lady Eagles were led by Shelby Flanagan, who scored 18 of the 32 points, and had 7 steals and 2 assists. Libby Tank added 9 points and had 12 rebounds. Johanna Kubacki added 4 points and Mya Garza, 1. 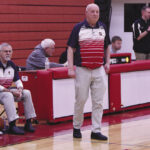 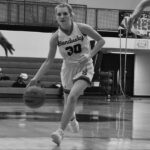