The suspect linked to several larcenies from autos in the Sandusky and Emmett areas was arrested last week by St. Clair County Sheriff Deputies.
According to Sandusky Police Chief Brett Lester, more than a dozen complaints had reported losses from vehicles throughout last week, ultimately resulting in a stolen vehicle Wednesday night.
According to St. Clair County Sheriff Tim Donnellon, calls reporting similar crimes started coming in around 5:30 Saturday morning.
A homeowner stated he saw a light come on in his driveway in the 10500 block of Brandon Road, went outside and saw the suspect inside his car. The man was able to chase the suspect away and gave a description to Deputies Bob Gross and Scott Francisco of a white male wearing a green sweatshirt or jacket.
The deputies received four other calls throughout the day of larcenies from vehicles and also an outbuilding being broken into. While investigating, they received information from Sandusky Police regarding a stolen auto and several cars being broken into in that city. Sandusky Police said they believed that the same suspect was involved in all the incidents and that the stolen car might be in the Emmett area. Deputies checked the area for the stolen vehicle. During that time, deputies saw an abandoned house on 2nd Street in Emmett. They saw a wet coat laying in the yard, along with a cooler containing several items, including a GPS unit and phone chargers.
At about 1:00 p.m., a citizen approached deputies stating he saw a suspicious looking person in the Marathon station at Kinney Road and I-69. The citizen described the man as being white and wearing a green hoodie sweatshirt. The deputies went to the gas station, saw the suspect, who was soaked head to toe from running through the woods, and made the arrest. They were also able to recover some of the suspected stolen property.
The suspect, a 41-year-old man originally from Columbus, Ohio, who state he is now homeless, is currently lodged at the St. Clair County Intervention and Detention Center, where he will face multiple charges from the larcenies and the breaking and entering. Sandusky Police are expected to seek charges their complaints.
The stolen auto was recovered Saturday afternoon in Sandusky. 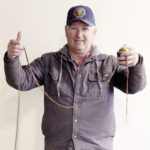 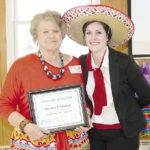 Next Story:
Patricia Chantiny Named Hospice Volunteer of the Year