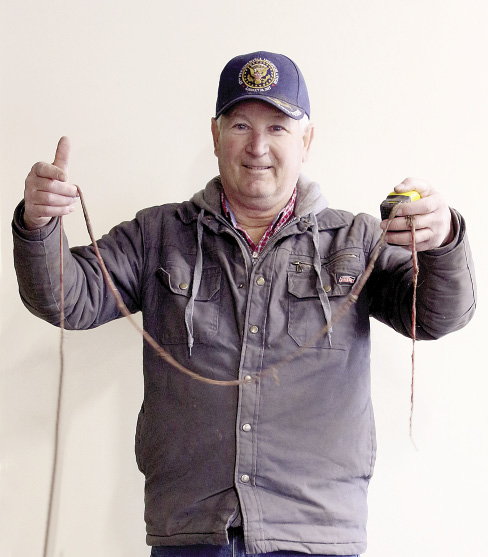 The last thing Dean Berden of the Snover area expected to see when he walked out of his house last Wednesday, was an exceptionally long earthworm – 89 inches long, yes that is right, 89 inches long.
As an organic farmer, earthworms are what you want to see, in fact, any crop farmer will tell you that his/her soil is in much better condition when you can count the earthworms in the soil.
The worms make underground tunnels, which allow water to seep into the soil more easily – the tunnels also help with aeriation, which in turn brings oxygen to the roots. Earthworms enjoy eating dirt, and pull out nutrients from the leaves and roots that are in the dirt. They break down these nutrients and deposit them back into the dirt through their waste.
If you’ve ever picked up a worm, they feel slimy, but they actually have hair-like bristles covering their body called setae. These bristles help the earthworm to travel and move around underground.
You may have heard that you can cut an earthworm in half and it will regenerate – it is true, but they do have a head, so it can only regenerate its missing body parts, it cannot become two worms.
Earthworms are hermaphrodic – they have the role of both male and female for reproduction, but they aren’t self-fertilizing, they still need to mate. The earthworm builds a coccon and anywhere from 2-4 weeks after mating, the babies crawl out of the cocoon.
The worms don’t have lungs, they breathe through their skin. The worm’s body is permeable, which means that fluids and air are absorbed into them from the environment in which live.