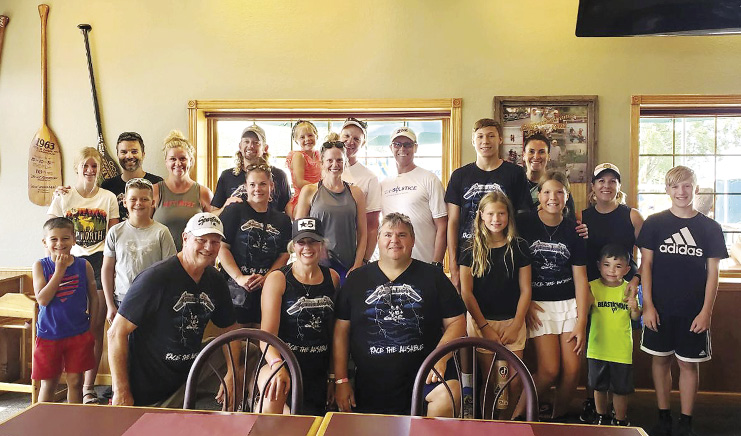 The 74th Annual AuSable River Canoe Marathon was held in Grayling on Saturday, July 30, at 9:00 p.m., with a finish line in Oscoda, 120 miles away. There is a local tie to the race, as Brian Kartanys and his wife, Dana, of Deckerville, are part of a “chase team” for racers Brandon Gerardy and Stephen Leppard in canoe #21. Other chase members in charge of feeding include Beth Schultz, Emily Gerardy, Ryane Leppard, Adam Beadenkopf, Brian Brausa, and Jennifer Page. They are all from Michigan, spread out from Deckerville to Kalamazoo to Roscommon. The group’s first canoe marathon was in 2008 and they are now competing in their 9th marathon this year.
Brian said, “It’s our responsibility to get the chase team to the proper feed points at the proper times. The job of the feeding team is to make sure that Brandon and Steve get nutrients and fluids throughout the night. We meet them at predetermined spots along the course of the marathon. Then we wade into the water and hand them their supplies as they paddle by. An ideal feed is getting them their stuff without them having to stop. We also carry emergency repair kits in case the canoe gets damaged during the race. It’s kind of like a NASCAR pit stop. The quicker we can hand off their supplies, the better.”
Brian and racer Brandon (Gerardy) went to college together. They both graduated U of M Flint as physical therapists in 2008. Brian said, “One day we were talking and somehow we got on the topic of the AuSable River Canoe Marathon. Brandon mentioned his friend Steve and said they were interested in the marathon that year. Brandon and Steve bought a carbon fiber C2 racing canoe and started training. We contacted a few friends to form the chase team and registered to enter the marathon. Steve is also a PT and one of his patients, Josh LeJarett, has spastic quadriplegic cerebral palsy. Josh is completely dependent on others for dressing, bathing, transferring, pretty much any type of activity. Josh expressed his desire to Steve to go to college with an interest in computers. So, Brandon and Steve decided to use the marathon to raise funds for Josh to go to college. Throughout nine marathons, they have raised enough money to pay for Josh’s classes, books, and some extras like transportation to and from college at KVCC. If anyone would like to make a donation to continue to support Josh’s medical needs and continued education, they can go to Paddling for Josh on Facebook for more info.”
The marathon is held the last full weekend in July. Brian said, “The teams line up according to sprint results held earlier in the week. When the race starts, they grab their canoes and sprint a 1/4 mile to the AuSable River. This year there were 96 teams registered. All 96 teams are trying to get into the river at a spot where the river is only about 20-30 feet from bank to bank. The teams paddle all night in the the dark. Some use flashlights and some will paddle in the dark. The finish line is 120 miles away in Oscoda. The race goes nonstop until the finish line. Some teams drop out because of damage to the canoe or health conditions like dehydration. There are six portages over dams. Over the years, we have seen teams from as far away as England, Brazil, and Australia. There are usually quite a few teams from Canada and other teams come from throughout the U.S. The marathon is one third of the Triple Crown of Canoe Racing. The other two major races are the General Clinton Canoe Regatta held New York on Memorial Day weekend and the La Classique in Quebec on Labor Day weekend. For more information on the marathon please go to http://www.ausable canoemarathon.org.
After their Marathon experience with their Paddling for Josh fundraising efforts, Brandon, Steve, and physical therapists on the west side of Michigan have now also established the Solstice Foundation. This is a physical therapy foundation to help future PT students impact their communities the way they were impacted by Josh. Brandon and friends even went back to U of M Flint’s PT program and established a Solstice Scholarship at their alma mater. Who would have guessed that one canoe marathon could lead to nine marathons let alone pay for a college degree and then a inspire a foundation? 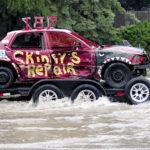