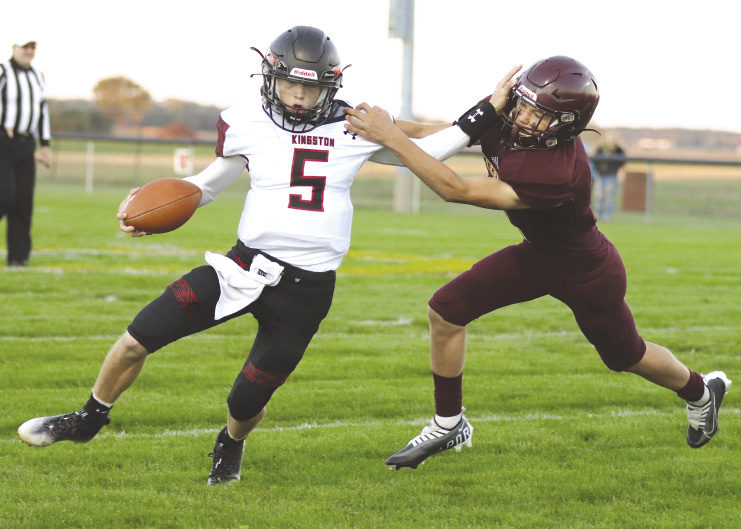 The Deckerville Eagles hosted the Kingston Cardinals last Friday night, and although they battled all four quarters, Kingston got the win, 56-20.
The Cardinals scored first with just a little over eight minutes left in the first quarter. The conversion failed. A few short seconds later, Hunter Garza ran in a 79-yard kick-off return to tie the game. The conversion failed. The Cardinals answered back with 7:47 left in the first quarter for a 12-6 lead. They scored again, with just a little over three minutes on the clock. Deckerville’s Brady Sharbowski ran in an 84-yard fumble return just before the end of the quarter, with Hunter Garza connecting with Connor Palmer for the conversion. Score, Kingston 18, Deckerville 14. Kingston wasn’t on the field for just a short few seconds before they scored early in the second quarter, with a good conversion. They scored another touchdown with just 43 seconds left in the quarter, with another good conversion for a 34-14 half-time lead. With 4.42 minutes left in the third quarter, the Cardinals added another touchdown and conversion for a 42-14 lead. Hunter Garza connected with Derek Osborne with a little over a minute left in the quarter, giving the Eagles 20 points. That was the final score for Deckerville; Kingston finished the fourth quarter with two more touchdowns.
Deckerville was 34-93 rushing, Kingston, 39-362. Passing, Hunter Garza was 6-7-62 yards.
Deckerville will take on Mayville at home, for Deckerville’s homecoming.