The Deckerville Eagles had an impressive final 5 minutes in their football game against Burton Atherton last Thursday. Coming from behind, the boys scored three times in those 5 minutes, with the last touchdown with 11 seconds left on the clock for an Eagle victory.
Coach Bill Brown said, “It was a great come from behind victory being down 16 points with five minutes to go, and coming back to win 44 to 36. The last five minutes we had to be perfect in every facet of the game defense, special teams and offense. The kids showed great character and never quit. We are so happy for them.”
Quarter scores – Deckerville: 14-0-6-24; Burton: 0-8-14-14.
The Eagles were 66-452 rushing, Burton 20-94. Deckerville was 2-5-16 passing, 1 interception; Burton 6-6-139 yards. Deckerville had 17 first downs, Burton 5.
Dylan Ball scored the first touchdown for Deckerville on a 14-yard run, but the conversion pass failed. They scored the second touchdown in the quarter on a Dylan Ball 7-yard run, with Hunter Garza connecting with Connor Palmer for the conversion pass. The Eagle defense held Burton scoreless in the quarter.
Burton scored the lone touchdown in the second quarter, with the 2-point conversion good, for a Deckerville 14-8 half-time lead.
Deckerville was outscored in the third quarter, 14-6. The Eagles scored on a Dylan Ball 2-yard run, but the conversion failed, giving Burton a 22-20 lead.
Burton scored twice in the fourth, giving them a 36-20 lead. But Deckerville didn’t give up, firing up, scoring the final touchdowns in the game for an Eagle victory. Dylan Ball ran in the first touchdown on a 44-yard run, with Kris Kosal running in the conversion. Dylan Ball scored again, this time on a 5-yard run, he also ran in the conversion, and he ran in the final touchdown on a 14-yard run, also running in the conversion.
Dylan Ball had an amazing night, scoring six touchdowns and two conversion runs. He was 56-394 rushing. Hunter Garza was 3-25; Kris Kosal 3-20 and Preston Holman 1-6.
Receiving, Derek Osborne was 1-9 and Connor Palmer 1-7, with a conversion.
The Eagles are at home this Friday taking on the Peck Pirates. 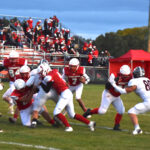 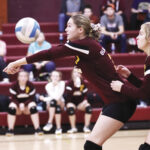