Terry and I were able to take a quick trip to Monmouth, ME to visit our daughter’s family in their new home near Augusta this weekend.
Since the location was a bit farther north in Maine, we decided to take the scenic route along the north shore of Lake Ontario and through Quebec.
Things were going pretty well in the land of the french, until we stopped to fill the tank with gas.
We were disappointed but not surprised, to find that our $50.00 foreign credit card purchase was declined, even before we were able to pump a single drop of gas. We took it in stride, paid up with good old American cash and continued on our way.
We crossed back into the USA in Vermont. The spot was a small tract of land barely enough for a single lane checkpoint. It was a pretty painless border crossing, in spite of us being detained long enough for our luggage to be searched.
Now freshly released from the American version of the KGB, and after presenting the “jackboots” our “papers”, we continued on our way, and promptly drove by a huge multiple acre U.S. Customs & Border Patrol military base. What a waste! It’s hard to believe that we need such presence to guard us from the Canadians.
Later we reached a point when we needed to stop for gasoline. Imagine our surprise to find, on the first day of our vacation, our credit card would not work in the US either. The bank took it upon themselves to suspend the card without contacting us, for suspected fraudulent activity, despite the fact the we have been regular travelers to Maine through Canada for the past three years. Good grief.
The situation was resolved following two days and no less than five phone calls, to the financial institution.
The destination itself was worth the border hassle and we were blessed to spend a few days and nights with our 11-month old grandson Nolan. We helped the kids get settled into their new home situated near Lake Cochnewagon, where the calls of the loons on the lake were hypnotic.
This week we say farewell to local business I’d Rather Bee Scrapbooking & More. Owner, Sandy Miller would like to express her sincerest gratitude to the many patrons that have frequented the establishment over the past 12 years.
The remaining inventory from the store will be offered for sale at the Tribune Recorder Leader office until supplies are gone.
Miller’s tenure as Chamber of Commerce President has also come to an end, following a three year term in the top spot with an additional two years as vice.
Jessie Lamb has been sworn in as the new Chamber President effective July 1st.
Please join me in wishing Sandy, a fond “Fare Thee Well”. She performed admirably as a tireless Sandusky champion, as well as a smart and dedicated servant to the business community. 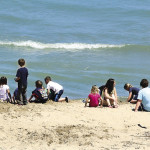