Goodtimers Step Up and Save Deckerville Homecoming

They say it takes a village, well, this year it is taking more than a village, as the Goodtimers are taking over what was known as the Deckerville Homecoming.
The Goodtimers is an organization of area men that have been holding fundraisers for several years, and with the proceeds, give back to those in need in the area.
This year’s event, “Good Times in Deckerville 2021” will be held August 6-7, starting with a Friday night Tractor Pull. It will be held at Wilson Park, and within the pull, a beer tent will be held. The Goodtimers have had a food tent for several years during Homecoming, and this year will be no different, starting with one during the tractor pull.
Plans are underway for a great fireworks display, also on Friday night, tentatively on the school grounds, with some extraordinary features being planned.
Saturday will be busy, with an all-female sand volleyball tournament, with proceeds to the Deckerville Volleyball program. A cornhole tourney is also being planned, with proceeds going to the girls basketball team. A parade will be held, starting at 1:00 p.m. After the parade, the annual Brandon Trowhill Pig Roast will be held at the beer tent. A car show is also in the works, as is the cow plop drop.
This event is being held in great part to the great sponsors of Kolar Brothers Construction, the KTeam.biz, Nutrien Ag, Brown’s Express & Market, Destiny Plastics and Tri-County Equipment.
Tractor Pull and Fireworks sponsors are still being sought, $150 sponsors will have a sign recognizing the donation, and $500 sponsors will have signs at the beer tent and parade. If interested, contact the Goodtimers at PO Box 13, Deckerville, MI 48427.
For those that are interested in being a vendor during the “Good Times in Deckerville”, also please contact the Goodtimers.

Doug Regentin, longtime Homecoming member said, ““I think it’s great that the Goodtimers are stepping up and taking on the responsibilities of the summer festival. Our committee had a core group of about six people who, for the most part, have been working together putting on the Homecoming for literally decades. It was time for some new blood and new ideas going forward. I think it’s safe to say we’re all optimistic about the future of the homecoming event.”
As more events are being planned, a full schedule of events will be published in the Tribune Recorder Leader in a couple of weeks. Also check on the Goodtimers website Goodtimers.org 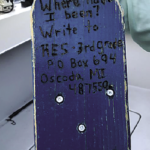 Next Story:
Boat released after being Found near Huron City