Lady Wolves Win Out at Home

The Sandusky Lady Wolves played host to the Bad Axe Hatchets Tuesday night in Sandusky. Sandusky took the lead in the first quarter and did not let up, outscoring the Hatchets 21-18 at halftime and 35-30 by the end of regulation.
Brooke Jansen had 9 points, 9 rebounds and 6 assists in the win over Bad Axe. Grace Guibord added 9 points, 6 rebounds and 5 assists of her own in the win. Helena Long notched 8 points while Ally Jansen added 6 points and 3 steals. Morgan Taege added 3 points, 5 rebounds and 3 steals.
The Sandusky Lady Wolves hosted Reese at home Thursday night in Sandusky for a grudge match, after losing last year’s Regional Final to the Rockets. The Lady Wolves started the night out cold, shooting two for sixteen through the first quarter and trailing the Rockets 6-4 at the start of the second. Sandusky started to catch back up in the second quarter, outscoring Reese 8-7 but still trailed at halftime 13-12. Sandusky came alive in the second half, thanks in part to Helena Long who rallied for 13 of her 15 points in the second half, sparking Sandusky’s offense to outscore Reese 22-11 through the second half. Sandusky took the win 34-24.
Helena Long led the way for the Wolves with 15 points, 5 rebounds and 6 steals. Morgan Taege had 10 points, 6 rebounds and 5 steals in the win. Grace Guibord added 5 points, 8 rebounds and 3 assists. Brooke Jansen had 4 points, 6 rebounds and 6 steals. Ally Jansen had 5 assists. The Lady Wolves have some time off before heading down to Little Caesar’s Arena on the 28th for a double header with the Varsity Boys team against the Deckerville Eagles. 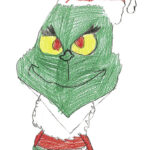