The Eastern Thumb Area Legion hosted the New Boston United at the Colleen J. Howe Arena in Sandusky last Saturday. Both teams traded blows in the first period with the score tied up after one. Neither team scored in the second period but the Legion came up with a goal in the third period to win it: 3-2.
Wyatt Ryan, Chase Talaski and Caleb Lenter all scored goals in the contest, with Ryan and Talaski each also earning an assist. Lauren Eager tended goal for the Legion with 37 saves on 39 shots for a save percentage of 94.9%.
The Legion now hold a 3-2 record, good enough for third place in the independents conference. The Legion travel to Tawas City this Saturday before returning home next Wednesday to face off with North Oakland in Sandusky. 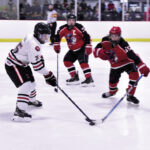 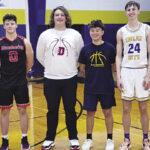