ALPENA – The Michigan National Guard, in coordination with the Michigan Department of Transportation (MDOT) and local partners, plans to close a portion of Michigan State Highway M-32 for five hours on August 5 to test its ability to land aircraft on roadways designed for cars and trucks.
The Michigan Air National Guard’s 127th Wing, Selfridge Air National Guard Base; the Air Force’s 355th Wing, Davis-Monthan Air Force Base, Arizona; and, the Air Force Special Operations Command, Duke Field, Florida, will land four A-10 aircraft and two C-146 aircraft on a closed-off portion of the road near the Alpena Combat Readiness Training Center to demonstrate how active duty and reserve-component units can integrate to project combat airpower in austere environments.
This landing operation is part of the annual multi-national, large-scale military training event, Exercise Northern Strike, hosted by the Michigan National Guard at the National All Domain Warfighting Center (NADWC), which encompasses the Alpena Combat Readiness Training Center and Camp Grayling Joint Maneuver Training Center.
“This is believed to be the first time in history that modern Air Force aircraft have intentionally landed on a civilian roadway on U.S. soil,” said U.S. Air Force Col. James Rossi, Alpena Combat Readiness Training Center commander. “Our efforts are focused on our ability to train the warfighter in any environment across the continuum so our nation can compete, deter, and win today and tomorrow.”
A-10 Thunderbolt II aircraft were specifically designed to be able to operate from an austere location and have exercised the ability to do so in the past in conjunction with NATO partners. In June 2018, A-10s from the Michigan Air National Guard conducted highway landings in Estonia as part of the multinational exercise Saber Strike.
The Air Force is shifting its operations concepts to project power through Agile Combat Employment (ACE) and has been applying ACE tactics to train and sustain its agility. Dynamic exercises like the highway landing during Northern Strike demonstrates the Air Force’s ability to deploy rapidly from anywhere, at any time, which is a critical edge the Air Force maintains over its adversaries.
“This year’s Northern Strike exercise includes testing the rapid insertion of an Air Expeditionary Wing (AEW) into a bare-base environment when the 127th Wing from Selfridge (ANBG) deploys up to the Alpena CRTC,” said U.S. Air Force Brig. Gen. Bryan Teff, Michigan Air National Guard adjutant general for air. “They will establish logistics and communications in order to receive follow-on forces, generate mission employment including the austere landing on M-32, and project combat power across all domains.”
“Michigan’s NADWC is uniquely postured to provide ample training airspace and facilities to accommodate training for the future high-end fight,” said Teff. “Michigan is integral to the joint fight and future warfighter. The joint force cannot execute without training as we fight.”
The NADWC facilitates Joint All Domain Command and Control (JADC2) service concepts including Multi-Domain Operations (MDO) and Joint All Domain Operations (JADO) throu1gh joint service and multi-domain events such as Northern Strike, Winter Strike, Electromagnetic Spectrum Training/Electronic Warfare (EMS/EW), and small Unmanned Aircraft Systems (sUAS)/Counter sUAS training. With more than 148,000 acres of maneuver space and 17,000 miles of special use airspace, Michigan’s NADWC builds readiness capacity for all warfighting functions in a contested multi-domain training environment that enables combined joint integration at echelon.
To facilitate the exercise, MDOT will close M-32 from east of Herron Road to west of King Settlement Road from 8 a.m. to 1 p.m. on August 5. During the closure, traffic will be detoured on M-65, Werth Road, US-23 and Ripley Street. This closure will be posted on MDOT’s travel information website and detour route signs will help guide travelers through the area. Portable changeable message boards will be posted leading up to the date of the closure as well.
Electrical power will be temporarily disconnected to residences immediately surrounding the landing area between the hours of 8 a.m. and 1 p.m. Air Force personnel will be in direct contact with those homes affected by the power outage and request residents to contact their utility company for backup plans if necessary.
“On behalf of the entire CRTC team, I’d like to extend our gratitude for the outstanding support we enjoy from our civil partners and the local community. Without them, this historic training event would not be possible,” said Col. Rossi. “This is only made possible by the unwavering support of the community members, the unmatched airspace that northern Michigan provides, as well as the support of community leaders, business and other support agencies.” 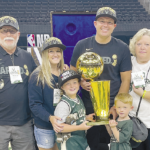 Next Story:
Project Blessing to hold a Grand Reopening