On August 17, tri-county law enforcement members consisting of the Huron Sheriff’s Office, the Sanilac County Sheriff’s Office, the Sanilac County Drug Task Force, the Bad Axe Police Department and the Tuscola County Sheriff’s Office received advisory assistance from two GHOST (Genesee Human Oppression Strike Team) members of the Genesee County Sheriff’s Office’s in conducting another operation that for the most part targets those who seek sex from underage children. This operation comes a month after another Huron County sex sting was carried out on July 12th that arrested three males, along with even one more operation done in Sanilac a year prior to in June of 2021 that arrested one male. Yesterday’s separate arrests have a 66-year-old man from Port Huron and had a 70-year-old man from Filion in Huron County jail needing $50,000 to be released. Both charged with felonies related to sex crimes, as well using a computer in the commission of a crime. This operation occurred out of an undisclosed location in Caseville Township utilizing internet sex and prostitution sites. The suspects would literally “shop” these sites, then reach out believing they were communicating and arranging a meeting with an underage sex participant; however, they were actually reaching out and communicating with the tri-county team. When the suspects arrived at the undisclosed location, young Deputy Sheriff decoys were utilized by being visible in order to satisfy suspicions and curiosities of the suspects. Both suspects acknowledged wanting to have sex with an underage male. A 68-year-old Lexington male acquaintance of the Port Huron suspect was released after being detained with possible charges pending. Several items of evidence were seized by officers during the operation such as cell phones, cash, vehicles and other things. Many of those items are subject to forfeiture.
This afternoon the Huron County Prosecutor’s Office formally charged both men with 3 felony related sex charges involving minors and they were then arraigned. As of the time of this release, 66-year-old Dennis M. Bales’ bond has been amended to $200,000 cash and 70-year old Dale Ignash has been released with his bond being amended to $10,000 or 10 %. Dennis Bales’ bond was likely amended due to him having past sex related convictions that has him on the Michigan Sex Offender Registry. This investigation will continue.
Fortunately, this incident did not involve actual teens forcibly being human trafficked for sex. However, all tri-county residents are asked to be on the lookout for this type of activity and report it to their Sheriff’s Office or local police. Potential victims, do not delay in making that call. Plans are again underway for another tri-county operation to occur in the future. Seekers of underage sex beware. 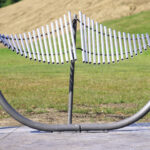 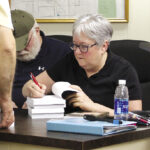 Next Story:
Sherry A. Burton Presents: “History of the Orphan Trains” in Marlette